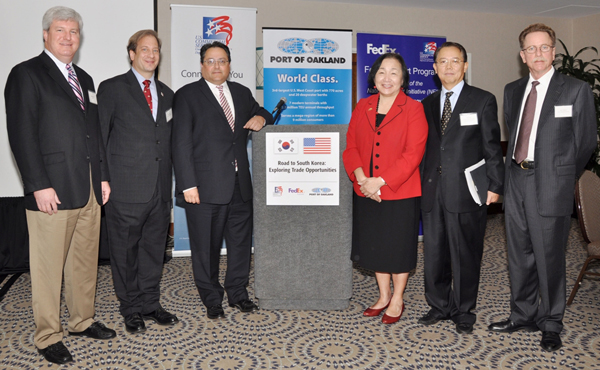 Oakland, Calif. – April 1, 2011 – The Port of Oakland, together with the U.S. Department of Commerce and FedEx, hosted “Road to South Korea: Exploring Trade Opportunities” at the Waterfront Hotel in Oakland’s Jack London Square on March 31, 2011. This day-long event brought together local business and U.S. and South Korean trade organizations to address the benefits and challenges of doing business in South Korea.

This seminar is particularly relevant in light of the pending ratification of the U.S. – South Korea Free Trade Agreement. The benefits of such an agreement will mean more goods from Korea and will result in more cost-effective importing and exporting for both countries. The United States is a major supplier to Korea for many agricultural products including almonds, cherries, beef, and poultry. All of these are major exports through the Port of Oakland.

About the Port of Oakland: The Port of Oakland oversees the Oakland seaport, Oakland International Airport and 20 miles of waterfront. The Oakland seaport is the fifth busiest container port in the U.S.; Oakland International Airport offers 130 daily flights; and the Port’s real estate includes commercial developments such as Jack London Square and hundreds of acres of public parks and conservation areas. The Port of Oakland was established in 1927 and is an independent department of the City of Oakland. Please visit: www.portofoakland.com.