The Federal Aviation Administration (FAA) establishes design standards to ensure the safety of airports. These standards include criteria for runway safety areas (RSAs), which are clear areas around a runway, free of objects and structures. Similar to a truck safety ramp on a highway, RSAs are designed and maintained to enhance safety in the event that an aircraft were to undershoot, overrun or veer off a runway. RSAs also provide greater accessibility for firefighting and rescue equipment during such incidents.

Most airports, including Oakland International Airport (OAK), were built before the current RSA standards were adopted. In the late 1990s and early 2000s, a series of incidents at other airports around the United States highlighted the need for these "grandfathered" airports to enhance their RSAs. These incidents led to the passage of Public Law 109-Лњ115, which states that вЂњnot later than December 31, 2015, the owner or operator of an airport certificated under 49 United States Code 44706 shall improve the airport's RSAs to comply with the FAA design standards required by 14 Code of Federal Regulations Part 139 (Public Law 109-˜115, November 30, 2005 [119 STAT. 2401] ). (PDF)

Complying with current RSA standards can be challenging due to obstacles such as water, highways and populated areas that surround airports. OAK staff, FAA, and other stakeholders evaluated numerous alternatives and selected a proposed RSA improvement program that would enhance runway safety entirely within the physical boundaries of the Airport, maintain existing operations, and avoid impacts to the San Francisco Bay.

In August 2012, federal and state environmental reviews of OAK's proposed RSA Program were completed and approved under the National Environmental Policy Act (NEPA) and California Environmental Quality Act (CEQA), respectively. Because some wetland areas on the airfield must be filled as part of the project, OAK has provided wetland mitigation off-site.

OAK's RSA Program is being constructed in two major phases, from May 2013 through December 2015. Phasing has been carefully planned to minimize runway closures and minimize effects on existing flight schedules. Noise abatement procedures such as the nighttime preferential runway use will not change as a result of the RSA Program. All runways are scheduled to be fully operational by the congressionally mandated deadline of December 31, 2015. 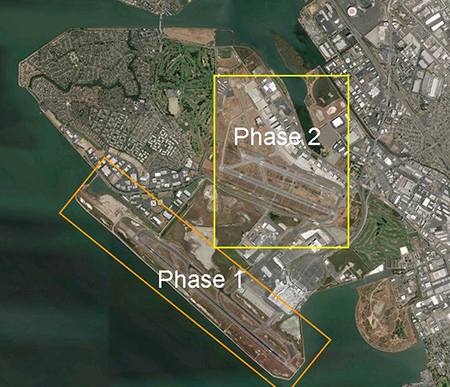 The following Phase I construction activities are underway or complete:

OAK has scheduled several temporary runway closures during nights and weekends to minimize the effects on airline operations, the public and surrounding communities. These runway closures are similar to existing routine runway maintenance closures in terms of duration and impacts on existing operations.

The following construction activities will complete the RSA Program:

An EMAS is a specialized system made of high-energy absorbing materials, installed in the RSA beyond the end of the runway. When an aircraft overruns the runway, these materials are crushed, absorbing the forward momentum of the aircraft and decelerating and arresting the aircraft's movement. In this installation, EMAS will provide an equivalent level of safety as standard RSAs and takes up less space on the airfield than a standard RSA, which is ideal for land-constrained airports such as OAK.

OAK's RSA improvement program is valued at over $100 million, about 80 percent of which is being funded by FAA Airport Improvement Program (AIP) grants and the balance by Port of Oakland funds.