Loaded shipping container volume reached an all-time high at the Port of Oakland in 2016. The Port handled the equivalent of 1.83 million loaded 20-foot containers last year. That was up 7.6 percent from 2015, topping the previous record of 1.82 million 20-footers set in 2013. The milestone can be attributed to a year-long containerized export boom as well as growth in imports. It’s important on two fronts:

Containerized export volume jumped 10.5 percent in 2016. In December, exports were up 13.5 percent. It was the fourth straight month of double-digit export growth. 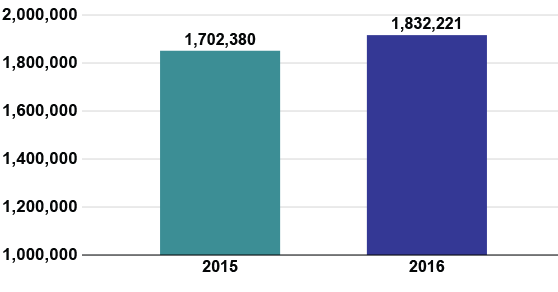 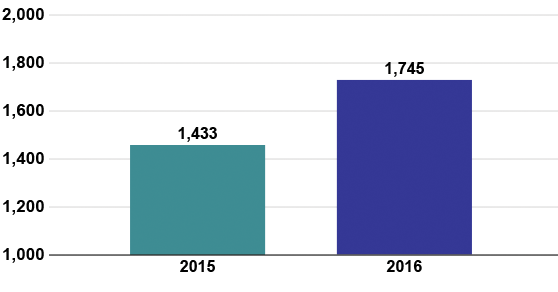 The Port’s 2016 goal was to protect cargo volume despite reducing the number of marine terminals. Terminals are where ships, trucks and trains converge to move the world’s containerized trade. The Port consolidated terminals to eliminate a capacity glut, then spread its subsequent volume increase among remaining terminals.

Our record-performance in 2016 was achieved against a backdrop of industry instability. Container shipping last year was roiled by financial downturn, consolidation and bankruptcy. We could see more of the same in 2017.

We believe Oakland will once again meet the challenge. Why? Because we changed forever last year…and for the better. We took excess capacity out of the system. We transformed the operating model. We began measuring performance and as a result, got improved performance. What does it all mean? We’re now well-positioned for the industry upheaval still to come.

This may sound counter-intuitive, but 2016 was one of our finest years at the Port. Here’s what we accomplished despite the maritime crisis:

Exhausting work went into achieving these results. It came from all parts of our organization: Maritime Division, Engineering, Finance, Legal. These groups deserve credit for transforming the Port of Oakland in a difficult year.

The biggest thank you, however, is reserved for our external stakeholders. They brought us practical solutions to problems that bedevil ports nationwide. The list of collaborators includes, shippers and shipping lines, marine terminal operators, motor carriers, longshore labor, waterfront employers, railroads and maritime regulators. Some served on our Port Efficiency Task Force. Others advised individually. Either way, we couldn’t have advanced our agenda without them. Here’s an update on what we’ve done together:

Consolidation: The Port of Oakland successfully reduced from five-to-four active marine terminals without losing cargo or vessel calls. The impact? Severe overcapacity disappeared. So did non-compensatory pricing that darkened the P&L of terminal operators. Our four terminals are now run by three operators who handle much more cargo-per-acre leased. This has led to healthier bottom lines. It has also prompted investment in terminal improvements. The other good news: we’ve still got room to grow. Our inactive Outer Harbor Terminal has been 25 percent leased. Prospective tenants have expressed interest in some of the remaining acreage. However, in an abundance of caution, we’re holding back to prevent a return of the space glut that once upon a time destabilized our terminals. We’ll put that land back into the game when demand dictates.

Marine terminals: It’s been a long time since the outlook has been this encouraging for marine terminals. We have four active terminals: Everport, Matson, Oakland International Container Terminal (OICT) and TraPac. The terminal operators all made long-term commitments to the Port of Oakland in 2016. Everport re-opened in January after a temporary hiatus to complete a multi-million dollar modernization. SSA invested heavily in labor, equipment, additional land and extended hours. It will soon raise the height of four ship-to-shore cranes. TraPac has just signed a new 14-year lease to double the size of its operation. It will invest more than $25 million in infrastructure, including raising two existing gantry cranes on berth 25/26. These moves demonstrate the faith our industry has in Oakland’s future. They give us stability on the waterfront.

Transformation: We’ve changed everything to move cargo faster. No more 8-to-5, our two largest terminals are now open until 3 a.m. for truck transactions – OICT Monday-through-Thursday and TraPac Monday, Tuesday and Thursday. OICT and TraPac have joined Everport in adopting an appointment system. Dray-offs and one-stops have been implemented to hasten import delivery. There’s a container yard devoted exclusively to empty container pick-up and return. Central Valley shippers can even pick-up and return loads and empties at a remote yard in French Camp.

Operating performance: This is easy to summarize. We weren’t so good. Now we’re better. Not great – there’s still work to do. But improvement has been dramatic. Ships now routinely spend less than 24 hours in Port. Our largest marine terminal – OICT –reduced turn times from 2.5 hours last summer to 90 minutes or less in December. The terminal consistently reaches 35 gross container moves per hour on vessels. TraPac is still addressing long wait times caused by increased cargo volume. But it will get there soon.

Technology: We’re often asked: why don’t you implement new technology? Well don’t look now, but we did – quite a bit – in 2016. There’s a new gate system at Everport and another due at TraPac. Automatic in-gates have just been introduced at OICT. Jupigo brings truckers together on mobile phones to transact street turns.

Labor relations: We’re not naïve. We know longshore labor and waterfront employers won’t always agree on everything. That’s the nature of things. But in 2016 the relationship was collaborative. The result was better and more transparent service to cargo owners. There were no significant contract disputes. Vessel operations remained the most productive on the West Coast. Initial discussions were held to extend the current labor contract. Shippers enter 2017 hoping for a continuation of this cooperative spirit between labor and employers.

Leadership: Unique issues dogged our industry for much of 2016. That’s a nice way of saying that no one had a road-map to problem resolution. Wherever possible, the Port of Oakland tried to create one. Since then, we’ve been recognized by customers, media and industry regulators for leadership. Here were the key issues and our attempt to address them: 1) terminal congestion – the Port invested $1.6 million to help terminals introduce night gates, a move others are now emulating; 2) SOLAS – controversial new requirements for container weight verification became a non-issue in Oakland as terminal operators offered their weight data as acceptable proof; 3) performance metrics – the Port developed the industry’s first mobile phone app to measure real-time terminal performance; 4) Hanjin bankruptcy – Oakland was one of the first ports to accept and work Hanjin vessels following its filing; and it was the first port to receive Hanjin empty containers.

Future growth: We took giant steps in 2016 toward sustainable future growth at the Port of Oakland. We finalized an agreement for construction of a 280,000-square-foot Cool Port, a state-of-the-art cold storage transload facility. It will lift overall cargo volume by redirecting chilled and frozen meat exports through Oakland. We continued to work on launching the 30-acre first phase of the Seaport Logistics Complex. It will be the West Coast’s only transshipment center operated within a port complex. We opened a $100 million rail storage yard to serve both operations.

Sustainability: Best of all, we reported results indicating that trade growth and environmental health can be compatible. The Port announced in 2016 that it has cut diesel particulate emissions by 76 percent since 2005. Emissions from trucks have been reduced 98 percent! We’re not done with the effort to mitigate the impact of global trade on local air quality. But these numbers give us confidence that we can grow responsibly – protecting air quality while we stimulate the economy.

Outlook: It’s likely to be another year of uncertainty in 2017. There are some positive signs for shipping. Freight rates have bottomed out. Overbuilding of fleets has slowed. Consolidation is creating stronger liner companies. But it’s still a long way back to profitability for the industry. How will the Port of Oakland cope with the unsettled nature of shipping? As we always do: collaborating with partners up and down the supply chain to improve service for our customers.