Last phase of study begins in partnership with US Army Corps

“This is an exciting time for the Port to advance the Turning Basins Widening Study,” said Port of Oakland Maritime Director Bryan Brandes. “As Lead Agency for CEQA, the Port is honored to take this next step in the study process of what would be a vital infrastructure project for improving how the Port accommodates large containerships.”

The Port and the U.S. Army Corps of Engineers (USACE) San Francisco District are in a partnership to study the potential project to widen Oakland’s federal turning basins. The Port expects to complete a draft Environmental Impact Report for public review in early 2023. 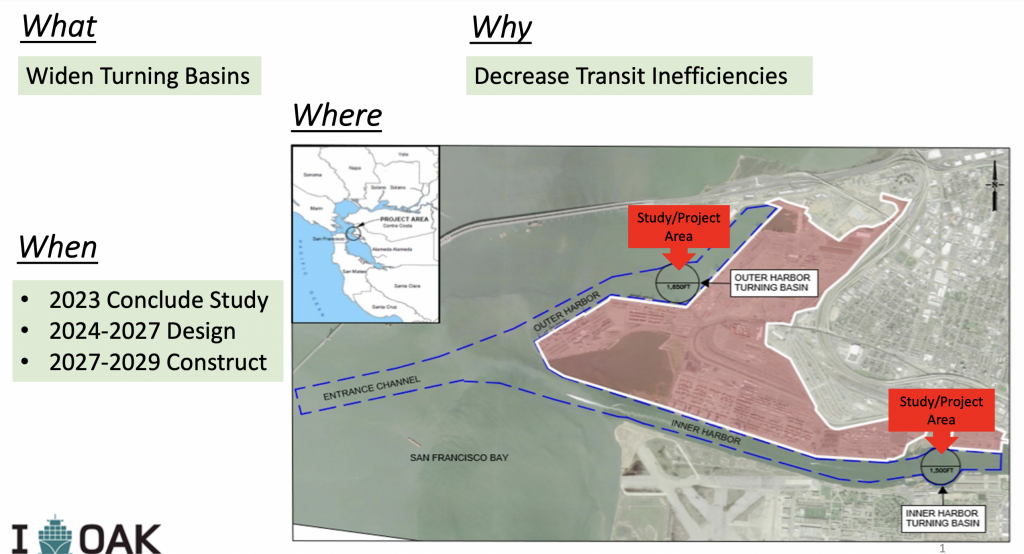 The basins were originally designed for ships that are shorter than the biggest, longest containerships currently moving goods in the transpacific trade lanes. Today, these large vessels have transit restrictions at Oakland, which lead to some delays. The goal of the study is to determine if widening the basins is feasible and would support greater efficiency for big ships maneuvering at Oakland.

“The Port’s turning basins are critical infrastructure both regionally and nationally,” said Mr. Brandes. “It is important we continue to invest in our nation’s waterways to meet the needs of our customers and the goals of our Port stakeholders. This is the very reason why the Port has reserved nearly 10 acres of the Howard Terminal for expanding the Inner Harbor turning basin. If the feasibility study deems expansion of the Inner Harbor turning basin necessary, the Port, with or without a future Howard Terminal ballpark project, has both the ability and authority to expand into Howard Terminal to ensure maritime operational efficiencies.”