Oakland, Calif. – October 10, 2018: Tall Ship Lady Washington will be docked at Jack London Square at the foot of Broadway, Saturday and Sunday. Visitors can experience maritime history by taking a vessel tour for a small donation to the floating museum. There are also ticketed sailing trips on San Francisco Bay.

Lady Washington was built in Aberdeen, Washington, by the Grays Harbor Historical Seaport Authority and launched in 1989. She is a full-scale replica of the first American vessel to make landfall on the West Coast of North America in 1788 and the first American merchant ship to trade in Honolulu, Hong Kong and Japan. 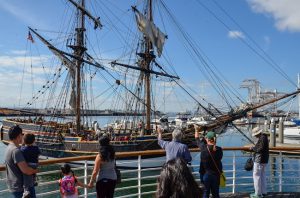 Since her debut in 1989, Lady Washington has appeared in several motion pictures and television shows, including Pirates of the Caribbean: The Curse of the Black Pearl, Star Trek: Generations, Once Upon A Time and Revolution.

Schedule for Oct. 13 and Oct. 14: Vessel Tours are 10 a.m. to 1 p.m., adventure sails are 2 p.m. to 5 p.m. The ship’s crew provides a variety of hands-on educational experiences. For tickets please go to the Grays Harbor Historical Seaport Authority website.

About the Port of Oakland
The Port of Oakland oversees the Oakland Seaport, Oakland International Airport and nearly 20 miles of waterfront including Jack London Square. The Port's 5-year strategic plan - Growth with Care - pairs business expansion with community benefits, envisioning more jobs and economic stimulus as the Port grows. Together with its business partners, the Port supports more than 73,000 jobs in the region and nearly 827,000 jobs across the United States. Connect with the Port of Oakland and Oakland International Airport through Facebook, or with the Port on Twitter, YouTube, and at www.portofoakland.com.