OAK is now the third commercial airport in the U.S. to have SAF incorporated in the daily operations of a major airline

Oakland, Calif. – August 30, 2022: This month marks the first time that sustainable aviation fuel (SAF) will be used in the operations of Southwest Airlines® at Oakland International Airport (OAK). This introduction makes OAK the third commercial airport in the United States to have SAF incorporated into the daily operations of a major U.S. airline.

“Introducing SAF at OAK is an exciting moment in our environmental sustainability journey at Southwest Airlines, and we are even more excited to be the first carrier to bring SAF to OAK,” said Michael AuBuchon, Senior Director, Fuel Supply Chain Management at Southwest Airlines. “We’re focused on bringing more SAF into our operations and are thrilled to partner with OAK to take action that supports our environmental sustainability goals.”

This initiative is a part of Southwest’s goal to replace 10% of its total jet fuel consumption with SAF by 2030, which is an important step toward its long-term goal to achieve carbon neutrality by 2050. The SAF that will be used at Southwest’s OAK operation is provided by Neste and is made from renewable and sustainably sourced waste and residue materials, like used cooking oil or animal waste fat.

Adding Neste’s SAF to Southwest’s operation is a seamless process—after blending with conventional jet fuel in accordance with applicable industry standards, it is compatible with both Southwest’s existing aircraft as well as the airport’s current infrastructure. Check out more here.

Southwest Airlines has its largest California operation at OAK and is the busiest passenger carrier with over 240 peak day flights between 29 destinations across the USA, including to Hawaii and Mexico. Flights are available for sale exclusively at www.southwest.com. 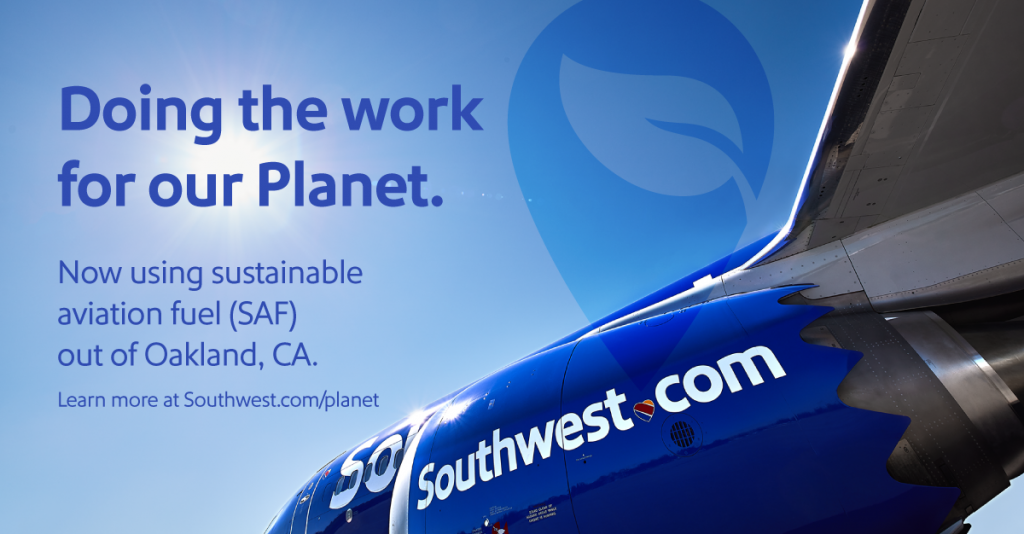 About Southwest Airlines
Southwest Airlines Co. operates one of the world's most admired and awarded airlines, offering its one-of-a-kind value and Hospitality at 121 airports across 11 countries. Having celebrated its 50th Anniversary in 2021, Southwest took flight in 1971 to democratize the sky through friendly, reliable, and low-cost air travel and now carries more air travelers flying nonstop within the United States than any other airline1. Based in Dallas and famous for an Employee-first corporate Culture, Southwest maintains an unprecedented record of no involuntary furloughs or layoffs in its history. By empowering its more than 62,0002 People to deliver unparalleled Hospitality, the maverick airline cherishes a passionate loyalty among as many as 130 million Customers carried a year. That formula for success brought industry-leading prosperity and 47 consecutive years3 of profitability for Southwest Shareholders (NYSE: LUV). Southwest leverages a unique legacy and mission to serve communities around the world including harnessing the power of its People and Purpose to put communities at the Heart of its success. Learn more by visiting Southwest.com/citizenship. Southwest is also continuing to develop tangible steps toward achieving carbon neutrality by 2050, including offering Customers an opportunity to help the airline offset its carbon emissions. To be part of the solution, visit Southwest.com/wannaoffsetcarbon.

About Oakland International Airport
Oakland International is the main airport for the greater East Bay, the most populated area in the metropolitan San Francisco Bay area. It is the closest airport to most Bay Area employers. By roadway and BART air-rail, OAK enables excellent access to all of the region’s business, entertainment and tourism venues. The vision of Oakland International Airport is to be the airport of choice for San Francisco Bay Area residents and visitors alike. OAK is operated by the Port of Oakland, which also oversees the Oakland seaport and 20 miles of East Bay waterfront. Together with its business partners, the Port supports more than 84,000 jobs in the region with more than a $130 billion economic impact.