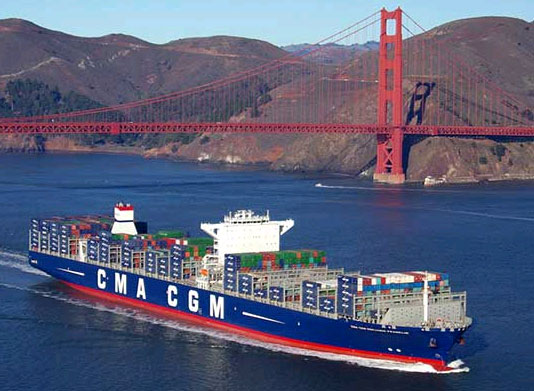 Maritime enthusiasts welcomed the megaship CMA CGM Benjamin Franklin back to the Port of Oakland this morning. The 1,310-foot-long container vessel berthed in Middle Harbor as spectators snapped photos from an adjacent park.

It was the second call here this year for the largest ship ever to visit the U.S. Dockworkers immediately began the process of loading and unloading containers from the Franklin. The ship is scheduled to depart for Seattle Friday.

"She arrived on schedule and crews went right to work," said Maritime Director John Driscoll. "It's another chance to show that the Port of Oakland is ready and able to handle ultra-large container vessels.

The Franklin tied up at Oakland International Container Terminal Berths 55 and 56 on Oakland Estuary. Her stern abuts Middle Harbor Shoreline Park, a prime spot to glimpse the megaship.

Tomorrow's departure time for the ship is tentatively set at 7 a.m., the Port said. It added that it will post the information on the Port of Oakland website. When the time comes, tug boats will draw the vessel into the Bay, guided by San Francisco Bar Pilots. The boats will tug her stern-first. Once clear of the Estuary's narrow channel, the Franklin will rotate 180 degrees and head for sea.

The Franklin arrived New Year's Eve in Oakland on its maiden voyage. Oakland is the only U.S. port to have received the ship twice. The CMA CGM Benjamin Franklin can carry 18,000 20-foot cargo containers.