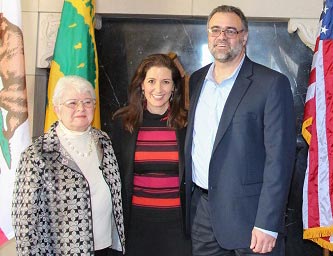 Local labor leader Andreas Cluver and long-time community leader Arabella Martinez have been appointed to the Oakland Board of Port Commissioners. They join the Board Feb. 11.

The City Council appointed Mr. Cluver, Secretary-Treasurer of the Alameda County Building and Construction Trades Council, and Ms. Martinez, Vice-Chair of the Latino Community Foundation Board of Trustees at its meeting Feb. 2. Oakland Mayor Libby Schaaf nominated them.

"We are very pleased that Ms. Martinez and Mr. Cluver are joining the Board of Port Commissioners." said Board President Earl S. Hamlin. "They both bring significant experience to the table that will help the Port realize its potential for Oakland and the region."

More on the new Port Commissioners is available HERE.