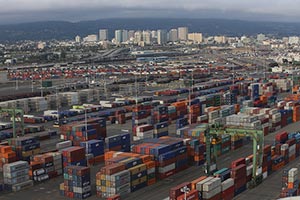 Export volume jumped 16.83 percent in January from a year ago, the Port said. It was the first increase in Oakland export volume since last July. Total cargo volume - imports, exports and empty containers, rose 38.46 percent for the month compared to January 2015.

1. U.S. importers stocking shelves ahead of Lunar New Year factory shutdowns in Asia; and
2. A favorable comparison to January 2015 when West Coast ports were stymied by a protracted waterfront labor dispute.

"An increase in cargo volume is always welcome," said John Driscoll, the Port's Maritime Director. "But what this really shows is that we have recaptured the cargo that moved temporarily away from the West Coast a year ago."

A number of importers diverted containerized cargo to gateways outside the West Coast a year ago in January. It was a work-around for slowdowns and congestion that hampered ports from San Diego to Seattle. Since a new waterfront labor contract was signed last spring, shippers have been re-establishing western supply routes.

Oakland said it handled the equivalent of 77,637 20-foot import containers in January. That was the most since last August, the traditional start of peak shipping season. It was 5,000 more than the import total in January 2014, when labor issues weren't constricting volume.

January cargo statistics for the Port of Oakland are available here.