Port of Oakland boss: ‘We can handle the business’

Port of Oakland boss: 'We can handle the business' 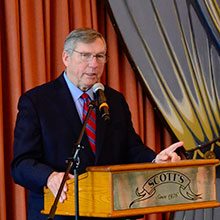 Oakland, CA - January 21, 2016: Executive Director Chris Lytle said today that the Port of Oakland will maintain cargo volumes and improve performance as one of its marine terminals closes.

"This Port can handle the business," the veteran maritime executive told an audience of 230 at a State of the Port speech in Jack London Square. "We will do all in our power to prevent disruption to the movement of cargo."

The Executive Director drew repeated applause as he outlined plans to revamp maritime operations when Oakland's Outer Harbor Terminal shuts down March 31. The terminal's operator said earlier this week it will exit the Oakland port "for business reasons."

Mr. Lytle said ships and cargo now managed at the terminal will be redirected to neighboring Oakland terminals. "We've identified a new home for 90 percent of the cargo that must be relocated," he said. As for the remainder of the business: "there is a good solution for that cargo, and we'll get there," he said.

Waterfront labor leaders and Oakland terminal operators have committed to a smooth cargo transition when Outer Harbor closes, Mr. Lytle told his audience. Among steps to be implemented:

Mr. Lytle said he will ask the Port's Board of Commissioners for approval to help finance transition costs. The funding could be used to provide performance incentives during the initial period of cargo migration. He said cargo-handling efficiency must improve for the transition to succeed. "We can't keep doing the same old things," he said. "We must bring service levels up to meet the need."

According to Mr. Lytle, Oakland marine terminals have excess capacity. Closing a terminal and redistributing cargo will lead to more efficient use of Port property, he said. The Executive Director said the Port will explore future uses for Outer Harbor Terminal that may not include container operations. "There are too many acres devoted to container operations," he explained. "We now have a chance to reset."

Among the other topics addressed in the State of the Port speech:

Labor relations: The Executive Director expressed thanks for recent collaboration between the International Longshore and Warehouse Union and the Pacific Maritime Association, the waterfront employer group. "We've made significant progress recently," he said.

Rail improvements: The Port will complete construction of its new rail yard in the second quarter of 2016, he said. This will add 44,000 feet of new track. It will give shippers the ability to form complete trains at the Port for transport of containerized imports.

Cold storage: Construction should begin mid-year on a 370,000-square-foot Cool Port Logistics facility. It will be able to receive 36 rail cars per day laden with chilled beef, pork, poultry and other perishables from the U.S. interior. "This will cement Oakland as the premiere location for perishable distribution," Mr. Lytle said.