Port of Oakland sponsors Back to School Giveaway

Port of Oakland sponsors Back to School Giveaway

Port donates 370 backpacks, one for every student at Prescott School 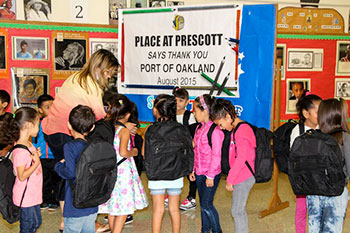 Oakland, CA - August 26, 2015: The Port of Oakland today is donating 370 backpacks to every student at Preparatory Literary Academy of Cultural Excellence (P.L.A.C.E.) at Prescott Elementary School. The Port is partnering with Oakland-based Lend A Hand Foundation (LAHF) to help disadvantaged youth in the Oakland Unified School District.

"Backpacks get students excited about the new school year,"; said Amy Tharpe, Port of Oakland Director of Social Responsibility. "As a West Oakland neighbor and partner, the Port of Oakland is doing its part to help local school children."

The Port purchased backpacks and school supplies while employees donated their time to prepare the backpacks for distribution. The Port's goal is to make sure that students are better equipped for learning.

These backpacks are filled with school supplies to help parents focus on other priorities such as food and clothing. Back to School Week begins this week at the Oakland Unified School District.

This year marks the 16th year that Oakland-based LAHF has donated school supplies to local youth. According to LAHF, there are approximately 30,000 low-income youth in Oakland alone who are in need of financial support.