Crowds drawn to Waterfront Flicks and Dancing Under the Stars 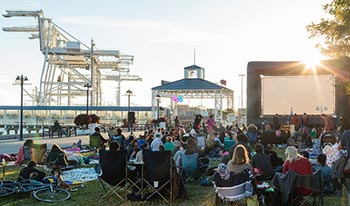 Jack London Square is a premier dining and entertainment spot located along the East Bay shoreline. Now with summer officially here, the Square transforms into an outdoor movie theatre every other Thursday evening and a huge dance lesson and party on Friday nights. Hundreds of people from all over the Bay Area come to the Square to enjoy these free public events.

Waterfront Flicks begins at 8 pm with pre-film family-oriented activities on the Ferry Lawn and movie showings begin at sunset. The Ferry Lawn is located next to the ferry pier at the foot of Clay Street in Jack London Square.

Dancing Under the Stars is every Friday night beginning with a free dance lesson at 8:30 pm and a dance party from 9 to 10 pm at the foot of Broadway. Each Friday features a different style of dance at the outdoor event including salsa, swing and line dancing.

The Port of Oakland and its partners host over 55 free public events a year at Jack London Square. Go to http://www.jacklondonsquare.com/events/special-events to see all of the activities offered.

Upcoming Dancing Under the Stars Dates: