From Sacramento to China, a lesson in cleaning up trucks and ships 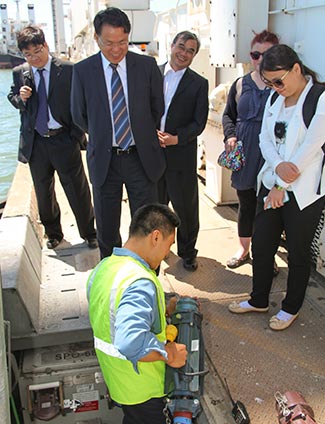 “Oakland ranks among the best in the world and we want to learn how you control pollution,” said Wen Wurui, Director General of the Tianjin Environmental Protection Bureau.

UC Civil and Environmental Engineering Prof. Robert Harley said state and Port programs have modernized Oakland’s harbor truck fleet. The result: not only are black carbon emissions plummeting, but nitrogen oxides, which create ozone, are down 53 percent. Prof. Harley’s Oakland research, conducted between 2009 and 2013, was shared at a state Environmental Protection Agency webcast in Sacramento.

According to the Port, its truck programs eliminated 14 tons of diesel particulate emissions between 2005 and 2012. During the same period, it eliminated another 151 tons of particulate matter from vessels. Further reductions have been achieved since then, the Port said.

Port officials demonstrated Oakland’s vessel clean-up initiative to the five-member Tianjin delegation. The program, known as shore-power, connects vessels at berth to the landside power grid. By relying on shoreside electricity, vessels can switch off diesel generators formerly used to power their systems in port.

“The city’s port, one of the country’s largest, provides electrical power to arriving ships to end the use of polluting diesel generators while they are loading and unloading,” said environmental watchdog Circle of Blue in a report issued this week.

The Port said it’s on target to reach an 85% overall reduction in diesel emissions by 2020. Tianjin officials said they hoped to learn from Oakland’s experience. Tianjin, situated on North China’s Bohai Bay, is the commercial gateway to Beijing. It handles the equivalent of 13 million 20-foot cargo containers annually.