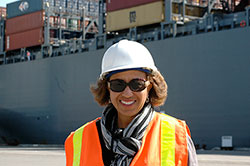 Oakland, CA – October 31, 2014 – Jill Bornor-Brown made history when she became the first female engineer as well as the first African-American female engineer to be hired at the Port of Oakland more than 33 years ago. She is the only African-American woman to hold a license in both Electrical and Mechanical Engineering in California. Ms. Bornor-Brown retires today from the Port of Oakland.

"Working at the Port of Oakland has been an extraordinary experience because I’ve had the good fortune to lead complex projects that deliver real benefits to our community whether they’re related to keeping our port secure or improving air quality,” said Ms. Bornor-Brown. "I want to encourage young women today to consider engineering as a career. It’s a fascinating field and very satisfying when you know you are serving the public good every day you go to work.”

Ms. Bornor-Brown's retirement leaving a remarkable legacy. She was the Port’s project engineer for the installation of the radiation portal monitors at the Oakland seaport. This made the Port of Oakland the first major container port in the nation to screen 100% of the containers entering the US through its gateway. More recently, she managed the design and construction of the Port’s shore power project. Shore power makes it possible for vessels to plug-in to a landside power grid and turn off the diesel engines, virtually eliminating ship emissions at dock. Additionally, Ms. Bornor-Brown was the project design and/or construction manager for most of the utility systems that were built over the last 30 years at the Oakland seaport and Oakland International Airport.

She has either managed or contributed her technical expertise to more than $580 million in engineering projects at the Port of Oakland.