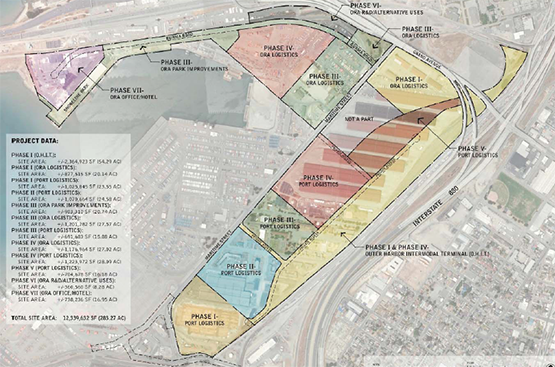 Oakland, CA – Nov. 1, 2013 – Oakland’s largest development project in several years, Oakland Global, formally breaks ground on November 1, 2013. This project will bolster the Port’s ability to compete globally, allow higher volumes of cargo to be transported more quickly, and create thousands of jobs, with historic local-hire requirements mandating that many of those jobs go to Oakland residents.

OVERVIEW: Under the $1.2 billion Oakland Global master plan, the former Oakland Army Base – which is adjacent to the Port of Oakland - will be replaced with the Oakland Global Trade and Logistics Center, a hub for transporting cargo in and out of Oakland more efficiently. The project partnership includes the City and Port of Oakland, and developers California Capital & Investment Group and Prologis.

PHASE I: In the $500 million first phase, 140 acres owned by the City of Oakland will be rebuilt into a modern complex – including 1 million square feet of new warehouses where exports and imports will be offloaded and repackaged. Localizing this deconsolidation work will reduce truck traffic, emissions, and wear on streets and highways. Ten acres of Port property is also being redeveloped into the first piece of a new railyard.

FUTURE PHASES: The remainder of the Army Base site is on Port of Oakland land and will be developed in phases consistent with the Oakland Global master plan: additional logistics and cold-storage facilities; a new intermodal railyard; and a new 7th Street grade separation. The Port intends to move forward on future phases as expeditiously as possible.

JOBS: Phase I will generate an estimated 1,500 on-site construction jobs, with 220 jobs already created by the construction of the railyard, which began in July. The project includes a landmark community jobs agreement that encourages construction employers to hire re-entry job applicants. It is estimated that 1,800 permanent operations jobs will be created once the Phase I facilities are completed. An additional 3,142 regional jobs are expected to be generated from the resulting economic output.

TAXES: Alameda County, the City of Oakland, the Oakland Unified School District, AC Transit and other public agencies are expected to gain $2.9 million in annual tax revenue when all phases are finished. By helping the Port of Oakland remain a competitive gateway for sea and rail cargo, the project will also help increase the more than $600 million in local, state, and federal taxes generated annually by the Port of Oakland and its tenants.