In 2008 the Oakland Board of Port Commissioners committed to reducing health-risk from seaport-related diesel emissions by 85% by 2020 from a 2005 baseline.

Port Board Second Vice President Earl S. Hamlin said, “We just completed an inventory of 2012 emissions to check on our progress, and we have already reduced maritime-related diesel particulate emissions by 70%. Today we mark another step in our on-going commitment to clean air and healthy communities. With our shore power project we expect to knock another 11 tons of diesel particulate matter out of the air. We thank all of our partners for helping us reach today’s milestone.”

Shore power at the Port of Oakland is a two-phase, multi-year program covering eleven berths. The Port has completed construction of its new electrical infrastructure system (Phases 1 & 2). Final testing of the new system is scheduled to be finished next month. The Port’s estimated project cost is approximately $60 million; the Port and private sector combined estimated cost for just the shoreside infrastructure is approximately $70 million.

The Port of Oakland took on the cost and burden of installing a shore power system to assist its tenants and customers with the financial and operational challenge of complying with California’s new regulation and to dramatically reduce air pollutant emissions that affect nearby Oakland residents from berthed vessels.

Up to an additional $20 million was awarded to the Port by the California Air Resources Board (CARB) and the Metropolitan Transportation Commission (MTC)/Federal Highway Administration.

“The shore power requirements are part of a suite of regulations adopted by the Air Resources Board that provide significant health benefits to the communities surrounding ports and railyards,” said Jack Kitowski, Assistant Chief of ARB’s Stationary Source Division. “ We applaud the Port of Oakland for its efforts in achieving this important milestone and making these health benefits possible for the local residents.”

“The Shore Power initiative was one of 17 proposals to win funding through a fiercely competitive process for the first round of grants in MTC's Climate Initiatives Program," said Commission Chair and Orinda mayor Amy Rein Worth in a statement prior to the event. "This reflects not only Shore Power's capability to deliver big reductions in greenhouse gas emissions but a commitment to partnership and innovation among public agencies throughout the Bay Area.”

Shipping lines that own and operate the vessels bear major additional costs associated with retrofitting the ocean-going vessels so that they can plug into shore power at berth.

Pacific Merchant Shipping Association Vice President Mike Jacob stated, "In less than two months, container ships will be plugging in at California’s ports as part of an estimated $1.8 billion industry investment in shore power. On January 1st, ocean carriers will be reducing air emissions faster than ever. Our members are investing billions of dollars worldwide in new ocean-going vessels outfitted with the latest technology, exceeding federal and international environmental standards. And we've been retrofitting hundreds of existing ships that call on California ports and installing the necessary terminal infrastructure for the 2014 transition.”

The Port, its funding partners, shipping lines and terminal operators all collaborated and invested in developing shore power to meet the new regulations and enhance air quality. California is the only state in the country with this leading air quality regulation that promotes clean air and improved public health.

The need for shore power comes from the response to growing public demand in California and internationally to reduce air pollutants caused by diesel-fueled engines, including ocean-going vessels at-berth. In 2008, the California Air Resources Board adopted a regulation to require reductions of air pollutants from ocean-going vessels. This regulation, commonly referred to as the “shore power regulation” requires that all operators of container, passenger and refrigerated cargo vessels that visit California ports more than 25 times a year employ an emission reduction system for their fleet by Jan. 1, 2014. 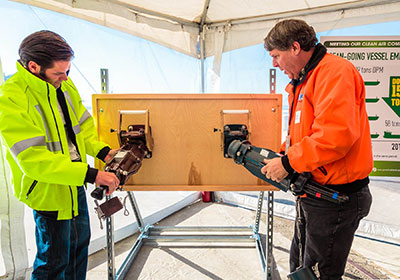