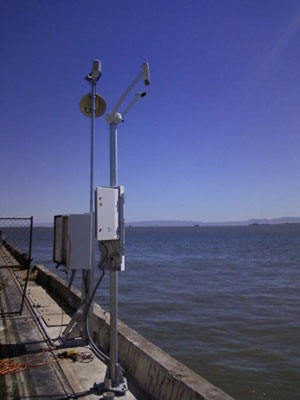 The Port of Oakland (Port) is the first port on the West Coast to embrace the FS11 Vaisala visibility sensor technology. Port of Oakland Acting Maritime Director Jean Banker said, “One of the benefits of this new sensor technology is that it provides good data and consistent results without being dependent on human observation. The equipment is also designed to be operationally reliable even during the harshest weather.” Mobile Bay, Alabama is the only other major port in the nation to install visibility sensors.

Port of Oakland Chief Wharfinger Chris Peterson stated, “This installation is the culmination of a two-year project and successful collaboration that included our Port, the San Francisco Harbor Safety Committee, U.S. Coast Guard Sector San Francisco (SF), Marine Exchange of SF Bay, NOAA’s National Weather Service Office Monterey and NOAA’s Center for Operational Oceanographic Products and Services (CO-OPS). Thanks to this entire team the sensor was installed and is operating.” Peterson commented on the importance of implementing this type of technology, “Adding this new capability provides more information to the San Francisco Bar Pilots, the Coast Guard and other mariners on the bay for safer and more efficient navigation of ships in difficult and changing weather conditions, in particular foggy days on the bay.”

Here is the complex technical name for the system of which this new visibility sensor is a part: the National Oceanic and Atmospheric Administration (NOAA) National Ocean Service (NOS) Physical Oceanographic Real-Time System (PORTS®). This system provides real-time water level, currents and meteorological data for navigation aid in twenty major ports and harbors across the country.

The integration of this sensor technology in the overall PORTS® will result in improved navigation safety and will facilitate decision-making for the US Coast Guard, San Francisco Bar Pilots, tug boat operators, ferry operators and the sailing public on San Francisco Bay, especially during the winter and summer months when fog is more prevalent. (Real time data)

Visibility sensors are widely used and essential for aviation and are becoming more critical for maritime applications as well. The SF Harbor Safety Committee has adopted “Temporary Safety Guidelines for Navigation in Reduced Visibility”, which includes the Oakland Bar Channel Critical Maneuvering Area (CMA) less than 750 yards away from the new sensor location.

Technical description of the new visibility sensor equipment:
The Vaisala FS11 is an instrument that uses forward-scattering technology to measure the amount of scattering of an infrared beam in a small volume of air between a transmitter and receiver, resulting in an extrapolated visibility at a set distance out to 5.4 nautical miles. This is accomplished by the transmitter making continuous infrared light pulses. The instrument only captures the visibility at that single height and location. Small-scale differences in the air mass, such as patchy fog or low-lying fog, are not captured.

Real-time data from these sensors are disseminated on:
NOAA’s Center for Operational Oceanographic Products and Services PORTS® website.