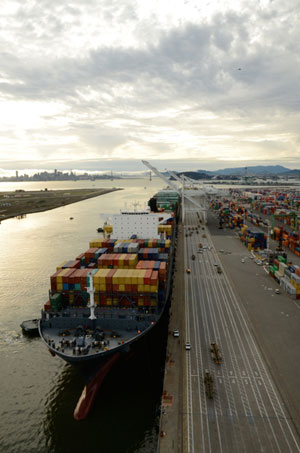 Oakland, Calif. - March 20, 2012 - The Port of Oakland welcomes tomorrow the largest containership ever to call any seaport in North America. The MSC Fabiola is a 12,562 TEU (twenty-foot equivalent-unit) vessel; an average container equals two TEUs. It is part of the fleet of the world's second-largest shipping company, Geneva-based Mediterranean Shipping Co SA. MSC is one of the Port of Oakland's fastest-growing carriers.

The vessel will arrive from the Port of Long Beach tomorrow and will be berthed at Oakland International Container Terminal. It will depart Thursday for an 18-day trans-Pacific voyage to Fuzhou and then onto four other ports in China.

"Hosting the largest containership ever to call in North America is what we mean when we say that the Port of Oakland is World Class, World Fast," said Oakland Board of Port Commissioners President Pamela Calloway. "We invest in our terminals, navigation channels, and landside infrastructure to welcome these ships because they are the cleanest and safest in the industry. They are also where the industry is headed and where we must head to continue to compete."

The MSC Fabiola is almost a quarter mile long, more than the length of four football fields or about equal to the height of a 55-story building. If all of the containers that fit on the ship were put end to end, they would stretch almost 50 miles.

"Seaport operations support nearly 40% of the more than 73,000 regional jobs generated by the Port of Oakland and its partners. Bigger ships mean more boxes; and more boxes mean more jobs," said Port of Oakland Executive Director Omar R. Benjamin. "Our role as a leading export gateway helped us maintain our maritime volumes last year despite a weak economy; bigger ships are part of growing our exports."

The vessel exhibits an evolution in containership design--the accommodation block and bridge (combined, "the deckhouse") are located more forward (toward the bow) and not directly over the engine. The split design enables containers to be stacked higher aft of the deckhouse, creating greater efficiency and loadability.

Of the more than 5,000 containerships deployed around the world, only 71 have a capacity of 12,500 TEUs or more, and the MSC Fabiola is the only one to have regular port calls in the United States. Virtually all vessels in this ultra-large class are deployed in the Asia-Europe trade lane.