Project part of Port's Seaport Air Quality 2020 and Beyond Plan

Oakland, Calif. – Aug. 24, 2020: The Port of Oakland’s largest marine terminal said today it has cut diesel emissions from all 13 of its massive yard cranes by 95 percent after retrofitting them with hybrid electric engines. Terminal operator Stevedoring Services of America (SSA) said that the project will eliminate about 1,200 metric tons of greenhouse gas emissions annually from each crane. 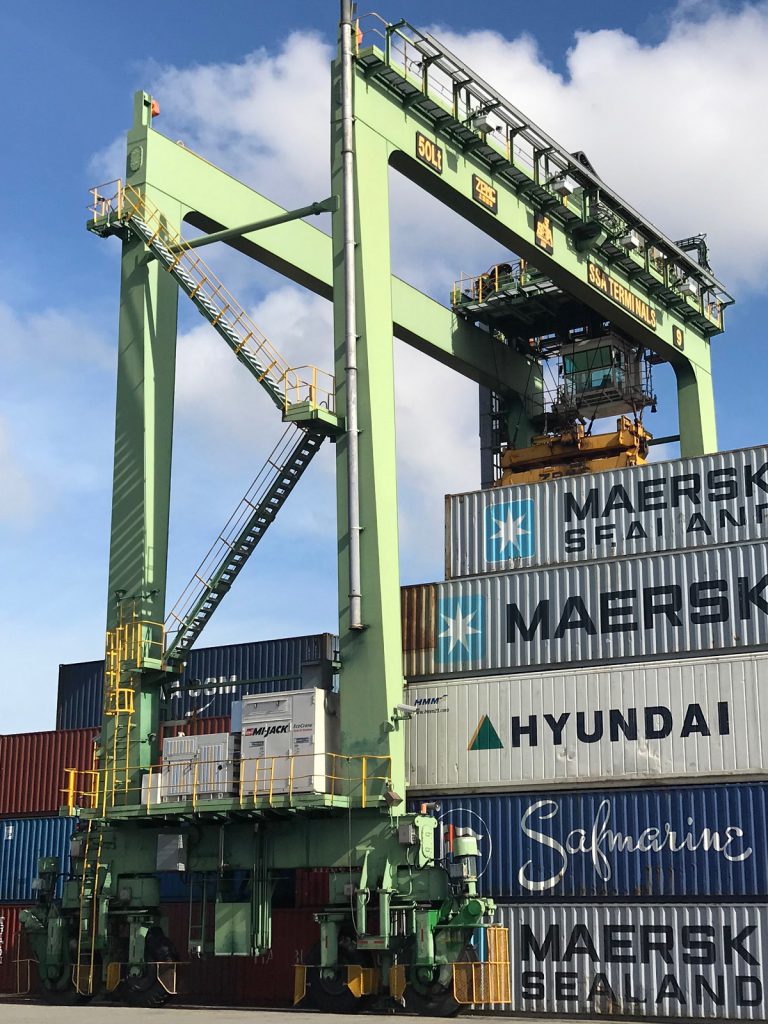 SSA said that the clean air project would result in a 93 percent reduction in diesel fuel. The older engines used 10 to 13 gallons of diesel fuel an hour whereas the hybrids use about three-quarters of a gallon an hour, according to Mr. Larson. “We were honestly surprised to learn how little diesel fuel we need to use now,” Mr. Larson said.

The hybrid retrofit is the first project of its type at SSA terminals. SSA replaced 1,000-horsepower diesel generators on its yard cranes with 142-horsepower diesel hybrids. The new power plants have small diesel engines used only to charge a crane’s pack of batteries. Each crane has a housing unit that contains the hybrid generator.

Mr. Larson said that the project was challenging, including the construction of new electrical systems for input power protection when converting current from AC to DC on a crane. Mr. Larson added that the hybrid generators capture energy as a container is lowered. Besides saving fuel and reducing emissions, the hybrid performs better than the older diesel generators because there is no delay in power delivery to the crane.

"We’re delighted with this project because it reflects the way the Port advances its emission reduction goals by focusing on feasible technologies that can perform the heavy work of moving containers,” said Richard Sinkoff, the Port of Oakland's Director of Environmental Programs and Planning. "It fits ideally in the Port's Seaport Air Quality 2020 and Beyond Plan. We hope it serves as a model for other marine terminals to follow."

Rubber-tire gantry cranes are industry workhorses at marine terminals throughout the world. Combined, the thirteen 90-foot-tall cranes can lift as many as 1,000 containers a day on and off trucks at OICT.

“We are pleased that an Air District grant has enabled the completion of the SSA hybrid crane project that will significantly reduce harmful emissions for many years to come,” said Jack Broadbent, Executive Officer of The Bay Area Air Quality Management District (Air District). “The hybrid engine technology installed on these large yard cranes will help improve air quality and protect the health of those in the communities surrounding the Port of Oakland.”

The SSA Terminals project is part of California Climate Investments, a statewide program that puts billions of Cap-and-Trade dollars to work reducing GHG emissions. The Cap-and-Trade program also creates a financial incentive for industries to invest in clean technologies and develop innovative ways to reduce pollution.

Planning for the crane conversions began after the signing of the CHP Program contract with the Air District on July 5, 2018. The first crane was retrofitted in February of 2019 and the 13th crane was converted in July 2020.