“If there are ways to strengthen our Port electrical infrastructure to promote more use of electrical power from our grid, we will do it,” said the Port’s boss. “We will collaborate with shipping lines and the marine terminal operators here in Oakland to build on the progress we’ve already made.”

Mr. Lytle delivered his pledge to visiting members of the Washington, D.C.-based World Shipping Council. Technical experts from five of the council’s shipping lines were in Oakland to study shore power. Known as cold-ironing in industry vernacular, it’s the practice of plugging ships into landside power grids. By using shore power, vessels can switch off their diesel engines at berth.

“Our goal is to plug in every vessel,” the Executive Director said.

Mr. Lytle said shore power has helped Oakland reduce diesel emissions by 75 percent in the past decade. The Executive Director told his audience of shipping experts that he wants to up the ante.

“We’ve reduced truck diesel emissions by 98 percent,” Mr. Lytle said. “So the real opportunity now is on the vessel side.” 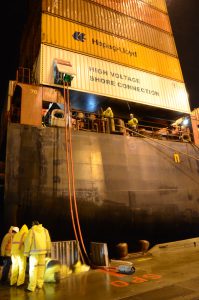 According to Port data, more than 70 percent of all ships visiting Oakland rely on shore power. That’s in line with existing rules governing California seaports.  But state regulators indicate they may increase the requirement in the coming decade. To prepare, Mr. Lytle said Oakland is taking inventory of roadblocks to shore power use.  The challenges can range from ill-equipped ships to not enough electrical vaults at the dock. “We’re trying to identify why every single vessel that comes here can’t plug in,” Mr. Lytle said.

The Executive Director said Oakland is considering a number of enhancements to increase shore power use.  Among them:

Oakland’s shore power program began in 2012. The Port said it spent $60 million building the infrastructure to plug in ships with financial assistance from federal, state and local partners. Ship owners spend about $1 million per vessel for shipboard equipment that allows them to plug in at California ports.