Port of Oakland outlook: buildout will lead to cargo records

“I’m forecasting growth because of the development that’s going on here,” Mr. Driscoll told a gathering of 50 trade and transportation leaders. “It won’t be dramatic – it will be steady - but it will result in more cargo volume than we’ve ever had before.”  Mr. Driscoll's comments came before an audience of supply chain officials that meets three times a year to review Oakland’s operating performance.

The Maritime Director said that three international shipping lines are contemplating Oakland first calls due to recent Port improvements. That’s important since the first port of call is where ships discharge most U.S. imports.  Oakland import volume could increase if any of the shipping lines makes the move.

“The ocean carriers are looking favorably at Oakland,” Mr. Driscoll said. “It’s a major discussion between them and their import customers.”

The Maritime Director said these projects are drawing the most interest from shipping lines: 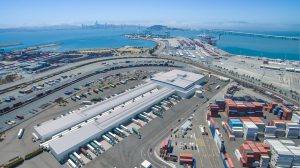 The Port of Oakland reported total volume of 2.37 million 20-foot containers in 2016. Earlier this year the Port projected that volume will reach 2.6 million containers by 2022.  That would be 8 percent more than the Port has ever handled in a single year.