The company said it’s buying nine new forklifts plus a yard tractor to reduce diesel emissions. The equipment will run on either propane or diesel fuel, Impact said.  The company added that its diesel-powered machines would operate with Tier 4F engines. The engines meet the Environmental Protection Agency’s toughest diesel exhaust restrictions, Impact pointed out.

“We comply with all local, state and federal regulations,” said Impact Transportation President Ron Cancilla. “But we’re also doing this for the health and safety of our employees, our closest Oakland neighbors and the entire Port community.” 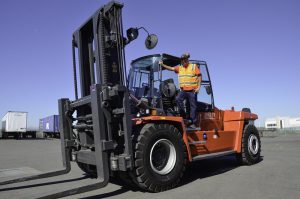 The company’s equipment upgrades could have a measurable impact on Oakland air quality, Port officials said. Impact handles more than 100,000 20-foot containers worth of cargo annually at its facility on Port property.

Diesel emissions from Oakland cargo-handling operations have already declined 82 percent since 2005, the Port said. It traced the improvement to the Port’s clean air strategy, which includes equipment upgrades by tenants. The Port said it expects another 16 percent reduction by 2020 with help from freight-haulers and marine terminals.