Oakland, Calif. – August 31, 2022: Pasha Hawaii and the Port of Oakland today announced the inaugural call of the MV George III to the Oakland Seaport, the gateway for containerized ocean cargo shipments in Northern California. The George III is the first Liquefied Natural Gas (“LNG”) powered vessel to call Oakland. The 774-foot LNG-fueled containership was built in Brownsville, Texas by Keppel AmFELS, and is the first of two new ‘Ohana Class vessels to join Pasha Hawaii’s fleet, connecting the West Coast and Hawaii. 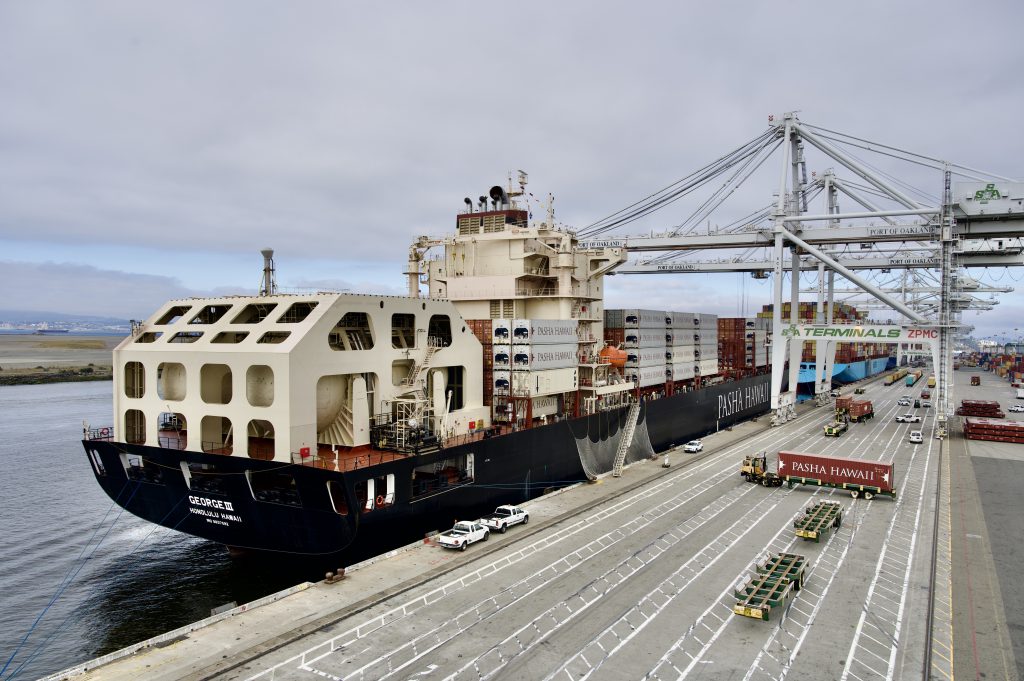 Pasha Hawaii brings its new, LNG-powered vessel to Port of Oakland; history in the making as this is the first LNG ship to call the US West Coast.

Pasha Hawaii is part of 75-year-old, third-generation, family-owned company The Pasha Group, whose roots were planted in the Bay Area in 1947. The MV George III, named after the late son of the company’s founder, honors his entrepreneurial spirit and commitment to community stewardship.

“My late father (George Pasha, III) and grandfather (George Pasha, II) would be incredibly proud to see the George III arrive in the Bay Area today. Her arrival signifies the positive impact and environmental strides this containership will make in our local communities,” said George Pasha, IV, President and CEO, Pasha Hawaii. “My father played an integral role in building our family business into the global transportation and logistics company that exists today. His legacy of innovation lives on with the introduction of this remarkable vessel and marks an important step towards the decarbonization of shipping in the West Coast/Hawaii trade lane.”

Operating on natural gas from day one, the new Jones Act vessel surpasses the International Maritime Organization (IMO) 2030 emission standards for ocean vessels, representing the most technologically advanced and environmentally friendly vessel to serve Hawaii. Energy efficiencies are also achieved with a state-of-the-art engine, an optimized hull form, and an underwater propulsion system with a high-efficiency rudder and propeller.

“We thank Pasha Hawaii for bringing the first LNG-powered containership to call the Port of Oakland,” said Port of Oakland Executive Director Danny Wan. “This visit by the MV George III supports the Port’s overall vision of a zero-emission seaport operation.”

Pasha Hawaii, an independent operating subsidiary of The Pasha Group, is one of the nation’s leading domestic ocean shipping companies serving Hawaii from the continental United States. The company operates a fleet of seven fully Jones Act-qualified vessels and operates out of multiple port terminals. Pasha Hawaii is a trusted partner for many of the nation’s leading retailers, manufacturers and U.S. government agencies, providing reliable containerized and roll-on/roll-off cargo services that leverage its unique combination of ocean transportation and inland distribution capabilities to deliver goods that are vital to the people of the State of Hawaii and the prosperity of the Hawaii market it serves.