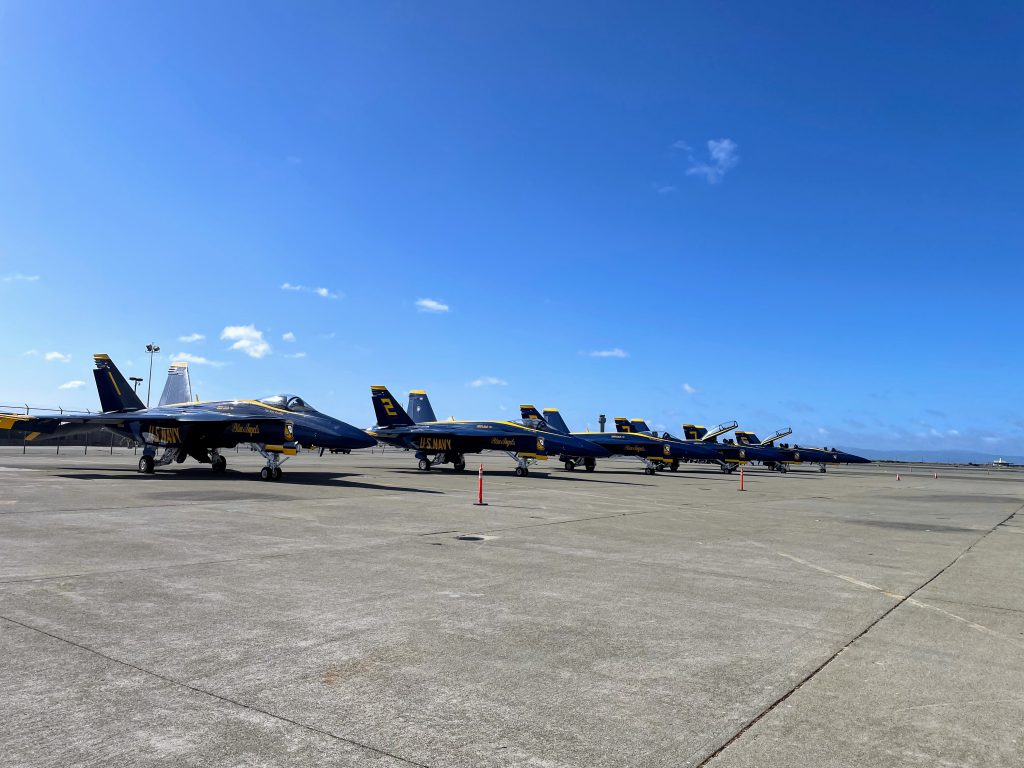 Oakland, Calif. – October 6, 2022: San Francisco Fleet Week 2022 is scheduled from Sunday, October 2nd through Monday, October 10th, 2022. Air show performers will include the U.S. Navy Blue Angels and other military and general aviation performers who will be based and utilizing the North Field at Oakland International Airport. With the exception of 2020 when the event was cancelled due to COVID-19, this will be the eighth consecutive year that the Blue Angels have used OAK as their home base for the event.

“We are excited to once again host the renown U.S. Navy Blue Angels and other performers during the SF Fleet Week air shows,” says Bryant L. Francis, Director of Aviation at the Port of Oakland. “The air shows are highly anticipated in our Bay Area community, particularly for those with a passion for aviation.”

During practice sessions and the air show demonstrations, airport neighbors will experience an unusual level of aircraft activity and noise. To be added to the Airport’s community advisory notification list, contact the Noise Hot Line at (510) 563-6463.

About the U.S. Navy Blue Angels

Since 1946, the U.S. Navy Blue Angels’ mission is to showcase the pride and professionalism of the United States Navy and Marine Corps and to inspire a culture of excellence and service to the country by conducting flight demonstrations and community outreach. Around the country, the Team serves as ambassadors of goodwill by bringing naval aviation to men, women, and children across America. The precision flight demonstrations showcase the professionalism, excellence and teamwork found in all Navy and Marine Corps units, as well as provide the thrill and magic of flight to people each year. Since its inception, the team has flown for more than 450 million spectators worldwide. Website: blueangels.navy.mil. Follow the Blue Angels on Twitter, Facebook, and Instagram.

Updates about travel during the COVID19 pandemic, current departure and arrival information, airport maps, and details about on-airport parking, shopping and dining and more, can be found at  www.oaklandairport.com. Follow us on Facebook, Twitter, and Instagram.