Oakland, Calif. – April 21, 2022: The National AIDS Memorial has completed the last of three displays currently being shown at Oakland International Airport in Terminal 2. The three displays provide airport visitors with interesting and engaging information about the AIDS Memorial Quilt, created 35 years ago, to honor and remember lives lost to HIV/AIDS.

Today, the Quilt, considered the largest community arts project in the world, is under the stewardship of the National AIDS Memorial. The Quilt’s 50,000 individually sewn panels contain more than 110,000 names stitched into its 54 tons of fabric, stored at a facility located near the Oakland International Airport. The Quilt is a powerful teaching tool, with sections being shipped to hundreds of communities throughout the country each year to raise awareness about HIV/AIDS and the issues of health and social justice. 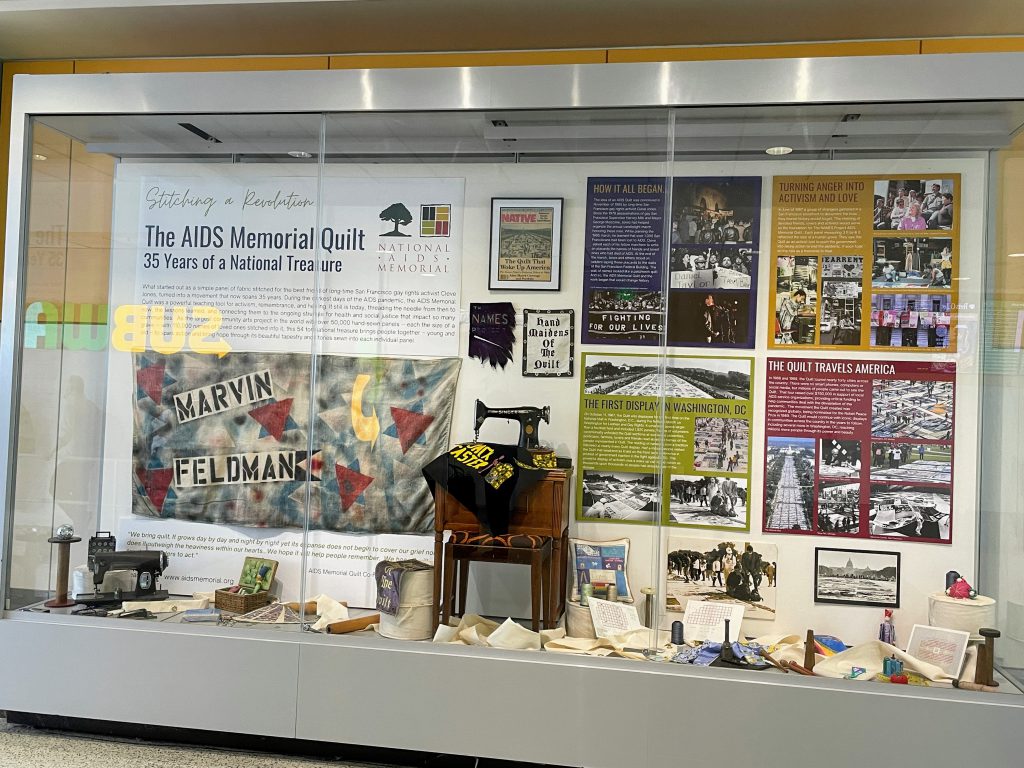 “The National AIDS Memorial is proud to partner with Oakland International Airport to bring these displays to travelers visiting Oakland to share the story of the Quilt and its power to open hearts and minds,” said CEO John Cunningham.  “More than three decades since its first panels were created, the Quilt remains an important symbol of hope, healing and remembrance, connecting HIV/AIDS to the issues faced by many people today in a very personal, compelling way.”

The three Terminal 2 displays share interesting stories, special mementos, photographs, and Quilt panels, inviting visitors to learn more about Quilt programs, including how to make a panel, volunteer and host the Quilt in their community. Currently, one 12’ x 12’ section of the Quilt is hanging in the Terminal 2 baggage claim area and is accessible to the general public. The other two displays are located in two mounted window boxes that are located past security in the Bayview Corridor in Terminal 2, across from the new Subway restaurant. 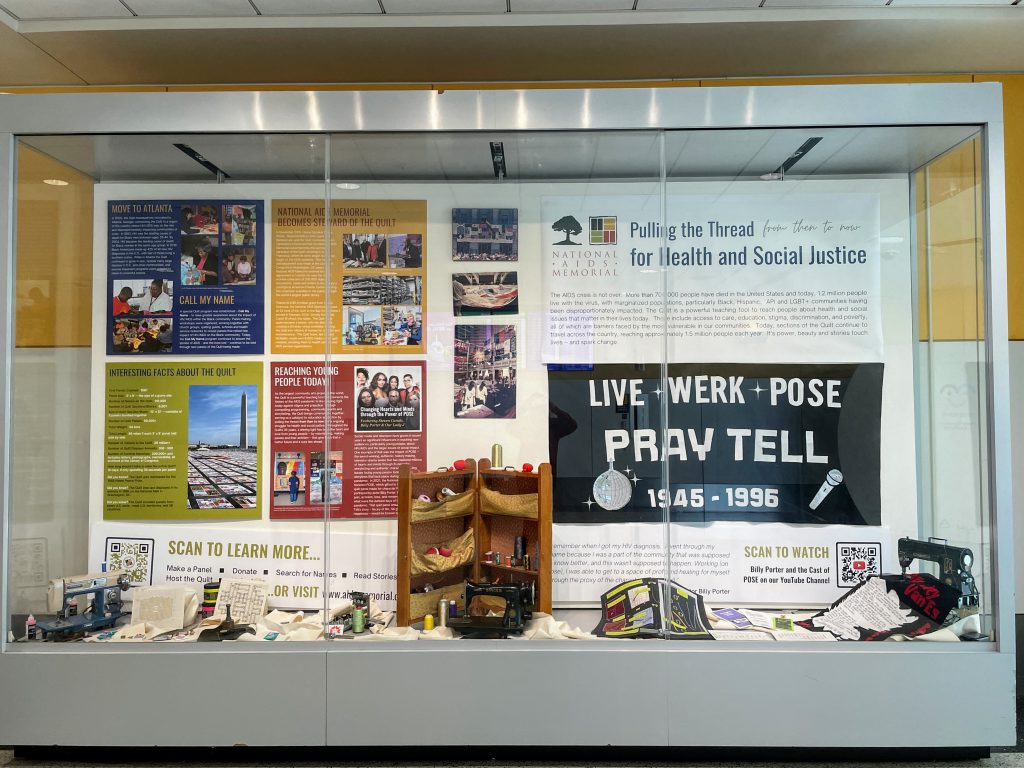 “This year, Oakland International Airport is proud to partner with the National AIDS Memorial with these special in-terminal displays,” says Bryant L. Francis, Director of Aviation at the Port of Oakland. “We hope that our passengers are as moved as we are by the cause and the Memorial’s hard work to preserve the memories of those lost to HIV/AIDS across the globe.”

The National AIDS Memorial will mark the 35th anniversary of the Quilt with an historic outdoor display in Golden Gate Park on June 11 & 12 that will feature nearly 3,000 hand-stitched panels of the Quilt.  The free public event will take place from 10 am – 5 pm each day in Robin Williams Meadow and in the National AIDS Memorial Grove. Expected to draw thousands of people, the display will be the largest display of the Quilt in over a decade and the largest-ever in San Francisco history. 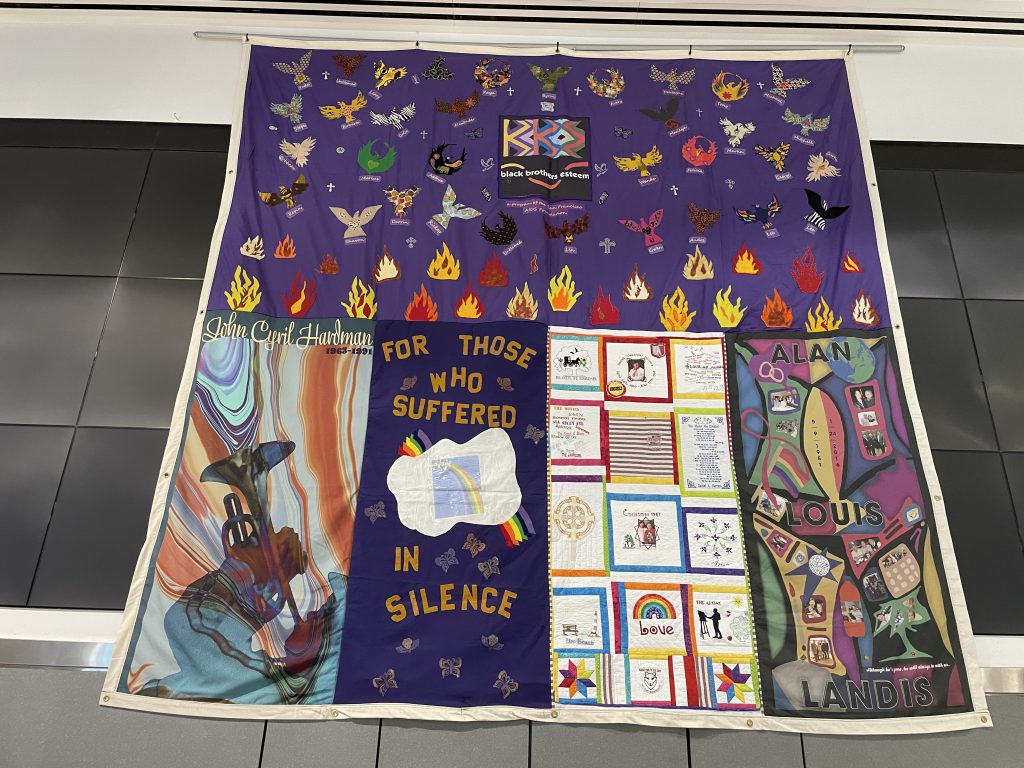 About the National AIDS Memorial

Oakland International is the main airport for the greater East Bay, the most populated area in the metropolitan San Francisco Bay area. It is the closest airport to most Bay Area employers. By roadway and BART air-rail, OAK enables excellent access to all of the region’s business, entertainment, and tourism venues. The vision of Oakland International Airport is to be the airport of choice for San Francisco Bay Area residents and visitors alike. OAK is operated by the Port of Oakland, which also oversees the Oakland seaport and 20 miles of East Bay waterfront. Together with its business partners, the Port supports more than 84,000 jobs in the region with more than a $130 billion economic impact.

Updates about travel during the COVID19 pandemic, current departure and arrival information, airport maps, and details about on-airport parking, shopping, and dining and more, can be found at  www.oaklandairport.com. Follow us on Facebook, Twitter, and Instagram.