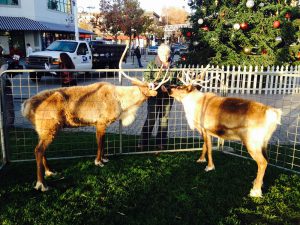 Oakland, Calif.– November 28, 2016: Thousands of visitors are expected in Jack London Square the first weekend in December for traditional holiday celebrations. Two, free, family friendly events are scheduled with the annual tree lighting ceremony, Dec. 2, from 5 to 7 and the “Deck the Hulls” lighted yacht parade, Dec.3, beginning at 5:30 PM.

Port and City of Oakland officials will light the 55-foot, fresh cut, Mt. Shasta fir tree at the foot of Broadway. The tree will be decorated with 5,000 sparkling white lights and 600 colorful ornaments.

Entertainment will include the Oakland School for the Arts’ Vocal Rush, Oakland Interfaith Gospel Choir, Oaktown Jazz, Pacific Boys Choir, the tap-dancing holiday trees and hip hop by TURFInc. Parents and their little ones can snap selfies with Santa and decorate an ornament to take home. Kids can feed and pet Santa’s reindeer.

The 40th annual lighted yacht parade will cruise the Oakland Estuary. Owners decorate their boats with lights and holiday displays. Viewing spots are outdoors from Jack London Square or indoors at one of the many restaurants at the Square. The parade route is between the ferry dock at Jack London Square and the Grand Marina in Alameda.