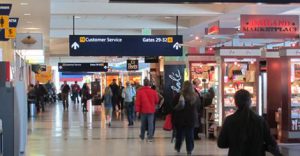 Port of Oakland Director of Aviation, Bryant L. Francis, said, “OAK has seen passenger gains for now 46 consecutive months, beginning with December 2013. We are pleased to see this momentum continue as we transition out of the summer peak and look towards the year-end holiday season. Our customers are responding strongly to an ever-expanding list of destinations now available nonstop from Oakland, and the convenience of flying OAK is bringing more passengers through our terminals.”

Thus far in 2017, Southwest commenced its inaugural Bay Area international service from OAK to two beach destinations in Mexico, in addition to operating new nonstop service to Newark/New York City for the summer season, which returns next spring as year-round service. Norwegian and LEVEL began year-round service to Barcelona in June. The list of nonstop markets increases in early 2018 as Norwegian will launch nonstop service to both Paris and Rome.

Oakland International is the fourth busiest airport in California and second busiest in the San Francisco Bay Area. Serving over 12 million travelers annually, OAK is the closest airport to the region’s top business and tourism venues. It is also the closest airport for most local residents.

Oakland’s air service roster to over 50 nonstop destinations is offered on 13 different airline brands – seven of which operate with OAK as their sole gateway into the San Francisco Bay region.

The vision of Oakland International Airport is to offer customers a world-class experience and be the airport of choice for Bay Area residents and visitors alike. OAK is operated by the Port of Oakland, which also oversees the Oakland seaport and 20 miles of waterfront. Together with its business partners, the Port supports more than 73,000 jobs in the region and nearly 827,000 jobs across the United States.