Oakland International Airport has more Spirit…and more flights than ever

Spirit Airlines adds nonstops to Baltimore and Detroit for summer 2017

Oakland, CA – Jan. 10, 2017: Officials at the Port of Oakland announce that Spirit Airlines will add nonstop service to Baltimore/Washington DC and Detroit, MI on May 25th. The Fort Lauderdale-based carrier announced the new flights today and seats are now on sale at Spirit.com.

The nonstop flight to Detroit reconnects the San Francisco East Bay and Wine Country with Detroit for the first time since 2003 when Spirit previously flew the route. The new flight will raise the number of nonstop destinations that are offered from OAK to 62, a record high during the Airport’s 90-year history.

Customers will now have a choice of carriers when flying cross-country from OAK to Baltimore/Washington DC. Spirit joins Southwest Airlines in the market which will operate two daily flights during Summer 2017.

Additionally, Spirit will increase the frequency of service from OAK to Los Angeles International Airport from 3 to 4 peak day flights in April. Spirit flies the Airbus 319/320/321 family of jets with 145 to 228 seats.

The new service will likely result in Spirit rising to become OAK’s second largest carrier serving a total of 7 nonstop destinations with 11 daily flights. It has grown steadily, adding flights and destinations since its return to OAK in 2012. Markets served and daily round trips as of May 25th 2017 will be: 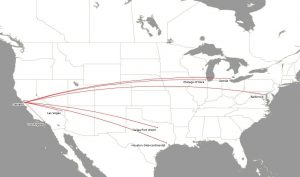 “The addition of these two destinations brings the much-needed convenience of nonstop flights to the East Bay and Wine Country region.” said Bryant L. Francis, Director of Aviation for the Port of Oakland. “It’s another big step toward the requisite level of air service that metropolitan Oakland should have as a primary gateway to all types of business, emerging tourism venues, and the largest population base in the San Francisco Bay Area.”

"We’re excited to expand our growing network with more flight options between some of the country’s most desired destinations,” said Mark Kopczak, Spirit Airlines' Vice President of Network Planning. "These new nonstop flights, combined with our ultra-low fares, will give many more customers the chance to check off their travel bucket lists with more money saved to spend making memories on vacation."

Spirit Airlines serves the San Francisco Bay Area exclusively at Oakland International. The airline is known for offering lower fares than other airlines. It was an early adopter of “unbundled” base fares, which it brands as the “Bare Fare,” now becoming more common in the airline industry. These fares allow travelers to add services a la carte, such as seat assignment, larger seats, extra legroom, refreshments, carry-ons, and checked baggage, as personal preferences and budgets dictate. 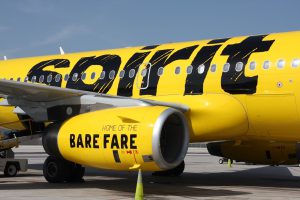 Oakland International is the fourth busiest airport in California and second busiest in the San Francisco Bay Area. Serving over 12 million travelers annually, OAK is the closest airport to the region’s top tourism and entertainment venues. It is also the closest airport for most local residents.

Oakland’s air service roster to over 60 destinations is scheduled on 13 different airline brands – seven of which operate with OAK as their sole gateway into the San Francisco Bay region.