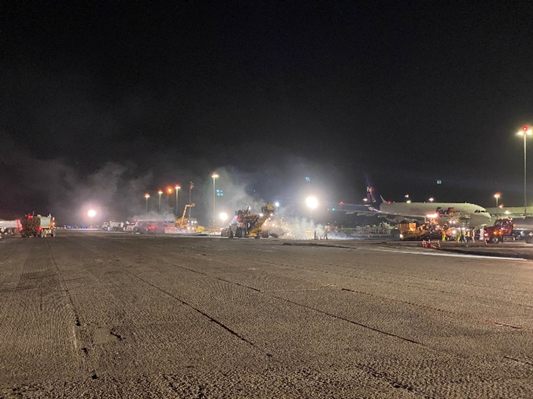 Oakland, Calif. – September 28, 2022: On Wednesday morning, Oakland International Airport hosted a press event to showcase its now-complete $30 million Taxiway Victor and Bravo Rehabilitation Project. The newly repaved taxiways will serve nearly all flight operations at the airport for the next 10-15 years, as these taxiways provide critical access to the airport’s primary runway.

“The rehabilitation of Taxiways Bravo and Victor was an important undertaking for us because of just how essential these taxiways are,” said Bryant L. Francis, Director of Aviation at the Port of Oakland. “Virtually all flights that depart or arrive at OAK will touch Taxiways Victor or Bravo at some point during their time on the ground. FAA grant funding was essential for us to maintain and improve this crucial thoroughfare of the airport.”

The total combined project cost for the taxiway rehabilitations was approximately $30 million. The project was partially funded by three grants from the FAA’s Airport Improvement Program. The first two grants, totaling approximately $14 million, were received in 2020. The third grant for the project was received in 2021, totaling nearly $12.3 million, for a total federal investment of nearly $26.3 million.

“I applaud the Port of Oakland and the FAA for their collaborative efforts to maintain and upgrade Oakland Airport, one of California’s critical transportation hubs,” said Senator Diane Feinstein (D-Calif.). “Last year, more than 8 million passengers and 1.4 billion pounds of cargo relied on OAK to transit the Bay Area. This program’s success will allow the region to continue serving as an epicenter of travel and commerce for California and beyond. Congratulations to all involved.”

“I was proud to have voted to pass the Bipartisan Infrastructure Law, which continues to provide critical investments across the state to support essential transportation infrastructure like airfield and facility improvements at Oakland International Airport,” said Senator Alex Padilla (D-Calif.). “This federal funding will continue to help enhance passenger and crew safety with the recent completion of the Taxiway Bravo and Taxiway Victor Rehabilitation Project.”

“This project has ensured that the Oakland Airport will remain a major center of commerce for the West Coast. I congratulate the Port of Oakland for their continued efforts to maintain the safety and efficacy of our major airline infrastructure,” said Congresswoman Barbara Lee (D-Calif). “The airport employs over 8,000 individuals and transports billions of pounds of cargo each year, it is imperative to our local economy that we continue to invest in its success.” 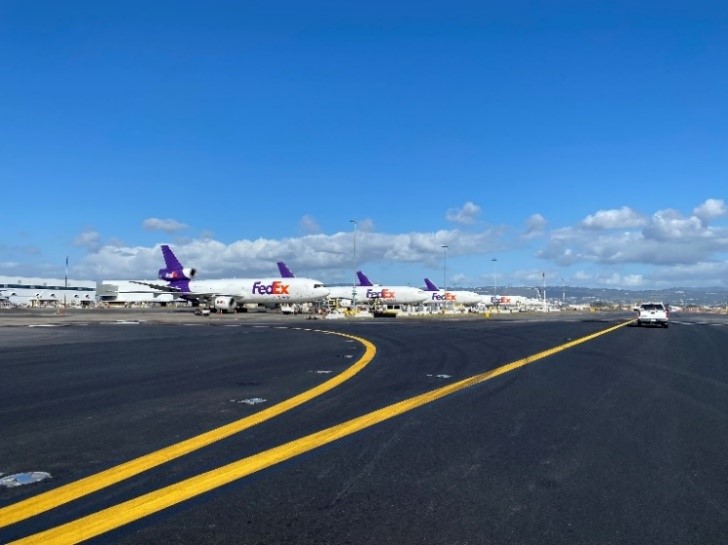 The Taxiway Victor and Taxiway Bravo Rehabilitation Project included an asphalt-concrete overlay and lighting infrastructure upgrades for these critical taxiways. The construction site spanned over 50 acres in one of the most utilized and operationally critical areas of the airfield. Eight separate taxiway intersections were affected. The project impacted nearly all operations, as these taxiways provide critical access to OAK’s primary runway, which is utilized by general aviation, passenger, cargo, and military operations. Even the Blue Angels will utilize these rehabilitated taxiways during their upcoming stay at OAK for SF Fleet Week.

The Port’s values of promoting small, local, and diverse businesses with local workforce can be seen in large construction projects of this type. The primary construction contractor for this project was a local business, as was the primary trucking company. We also contracted with several local Disadvantaged Business Enterprises (DBEs). Approximately 62% of hours worked on the rehabilitation were performed by local resident workers from Alameda and Contra Costa counties.

Key to the project’s planning, design, and construction success were numerous consultations with operational and community stakeholders. The engagement of our stakeholder partners was key in developing detailed project phasing plans which maximized safety, minimized impacts to airfield operations, and reduced potential community noise impacts during the project. 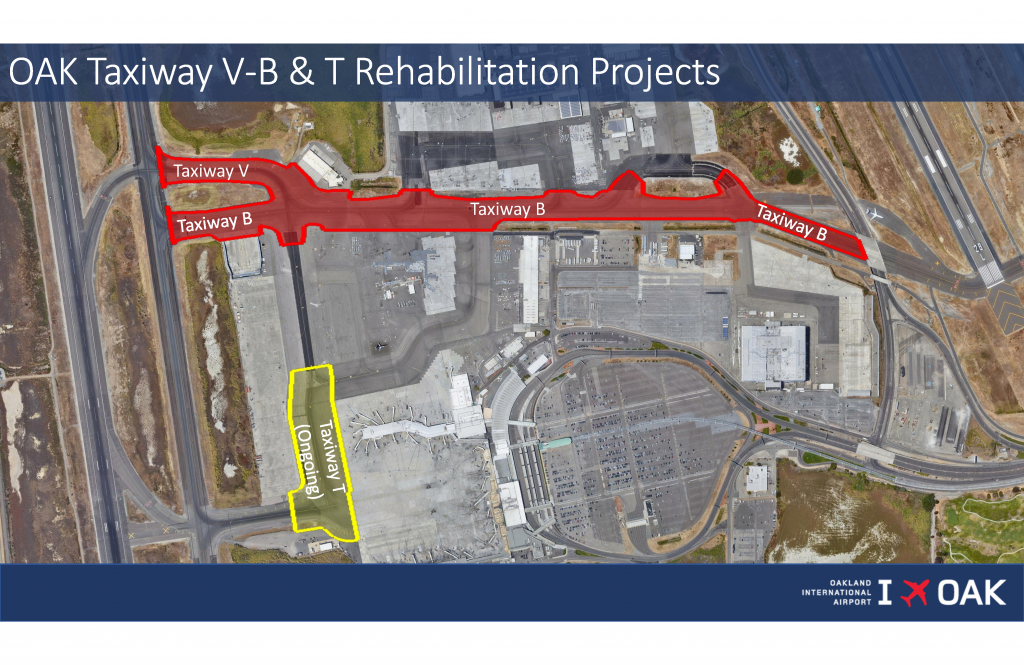 What’s next for airfield construction at OAK:

Continued collaboration with the FAA, our aeronautical stakeholders, and community partners will empower OAK to deliver timely airfield infrastructure improvements in the years to come. OAK will accomplish these goals by maximizing funding opportunities available through the Airport Improvement Program (AIP) and Airport Infrastructure Grant (AIG) Entitlement funds that were established via the Bipartisan Infrastructure Law (BIL).

Currently under construction at OAK is the Taxiway Tango Rehabilitation Project, with an estimated total cost of $15.9 million. Like Taxiways Bravo and Victor, Tango is also operationally critical to the airport, as it is the only taxiway connecting the primary passenger terminal buildings to the primary runway in the airport’s south field. Ongoing work includes taxiway geometry upgrades, pavement rehabilitation, airfield grading, drainage improvements, new airfield lighting, signage improvements, utility structure upgrades, and pavement markings. The project began construction in August 2022 and is projected to reach substantial completion in November 2022. A combined $11.2 million in FAA grants has been awarded for OAK’s Taxiway Tango Rehabilitation Project using AIP and AIG funding.

Looking ahead, the Port of Oakland will continue its partnership with the FAA on completing airfield geometry and safety improvements, as well as rehabilitating critical airfield pavements and infrastructure. Projects on the horizon include the pavement and lighting rehabilitation of Taxiway Whiskey and design efforts for rehabilitation of Runways 10R-28L and 10L-28R. 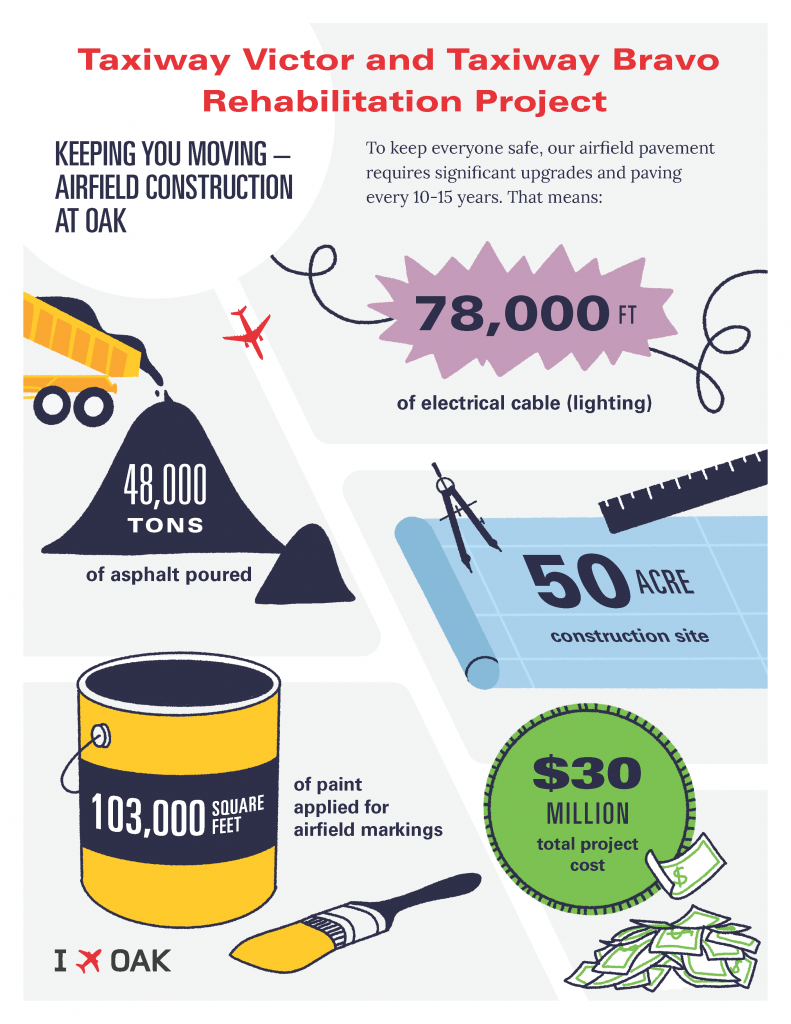