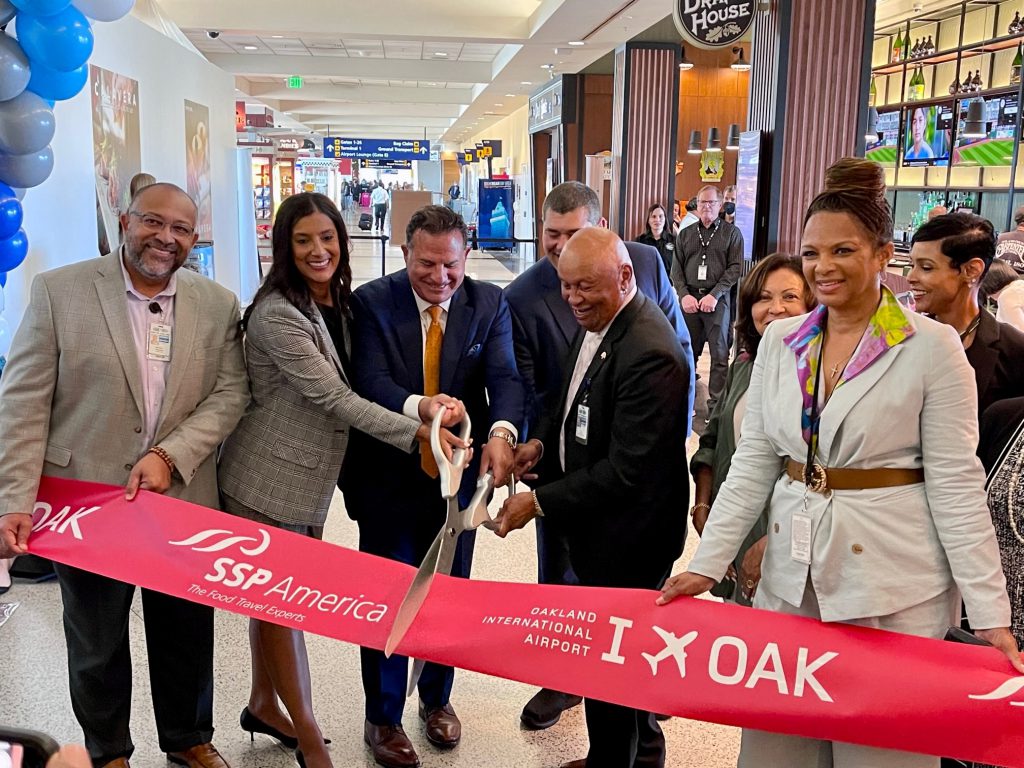 Oakland, Calif. – August 25, 2022: Oakland International Airport is celebrating the grand opening of three new airport concession locations including two Peet’s Coffee locations (Terminals One and Two) and Oakland Draft House (Terminal Two). The restaurants are operated by restaurateur SSP America, a division of SSP Group, a leading operator of food and beverage brands in travel locations worldwide. These three new locations are part of OAK’s new food and beverage program which has been underway since last year.

“Oakland International Airport is proud to introduce travelers to the recently completed Oakland Draft House and two new Peet’s Coffee locations,” says Bryant L. Francis, Director of Aviation at the Port of Oakland. “We encourage our passengers to take advantage of these new offerings the next time they Fly the East Bay Way. Stay tuned for more additions coming soon.”

The Peet’s Coffee in Terminal One is located near Gate 9 and the Peet’s Coffee in Terminal Two is located near Gate 26. Peet’s, born in the East Bay, is one of the leading coffee brands in the United States and responsible for introducing premium coffee to North America in 1966 at their first location in Berkeley, California. Peet’s dedication to crafting the perfect cup of coffee is steeped in every step of their process, from partnering with more than 59,000 small coffee farms around the globe to roasting by hand at the brand’s roasting facilities in the East Bay just a few minutes from OAK in Alameda, California. In addition to espresso drinks, drip coffee, Peet’s famous cold brews and a variety of additional beverages, Peet’s will offer baked goods, healthy whole-grain oatmeal, freshly made hot and cold sandwiches, gourmet salads, and snacks.

Located in Terminal Two near Gate 27, Oakland Draft House features Sierra Nevada Brewing Co. Sierra Nevada is headquartered in Chico, California, and was founded by craft beer pioneer Ken Grossman. The company is considered one of the most influential breweries in the U.S. having been a leader in the craft beer movement of the 1980s and 1990s. Today the company is one of the country’s most successful craft breweries and is known for its iconic Pale Ale. To complement the highly popular beer menu, SSP America will offer a variety of wines, cocktails, and additional beers. The food menu offers passengers a variety of options during all parts of the day including breakfast sandwiches and tacos as well as freshly made burgers and salads. The Oakland Draft House offers both take-out and sit-down table service with the later affording spectacular views of the San Francisco Bay.

Paul Loupakos, Senior Vice President of Development and Airport Retention commented on the openings, “Our team is positively thrilled to get these restaurants open. The Oakland International Airport team has been a true partner during the last several years, and now we’re excited to be open and serving the OAK passengers. Our special thanks to the Peet’s Coffee and Sierra Nevada teams as well—great partners make for great restaurants, and we’re extremely fortunate to be part of the OAK community.”

Other locations recently opened at OAK under the new program include Subway and Farley’s Café in Terminal Two and Oaklandish Coffee Collective in Terminal One. Tay Ho Oakland in Terminal Two, based on the immensely popular Vietnamese restaurant in downtown Oakland, is expected to open for business late this summer. Additional restaurants are currently under construction and will be announced soon.

SSP America is a division of SSP Group, a leading operator of food and beverage concessions in travel locations, operating restaurants, bars, cafés, food courts, lounges and convenience stores in airports, train stations, motorway service stations and other leisure locations. We operate in approximately 180 airports and 300 rail stations in 36 countries around the world and operated more than 550 international, national, and local brands across our c. 2,700 units. The SSP America team is driven by a shared vision to bring authentic restaurant experiences to every airport in North America. Our employees have a passion for exceptional food served by people who believe in heartfelt hospitality. Our airport partners trust SSP America to deliver a world-class portfolio of brands with broad passenger appeal and lasting commercial viability. Our brand heroes trust us to bring a taste of place to their hometown airport. www.foodtravelexperts.com/america.

Oakland International is the main airport for the greater East Bay, the most populated area in the metropolitan San Francisco Bay area. It is the closest airport to most Bay Area employers. By roadway and BART air-rail, OAK enables excellent access to all of the region’s business, entertainment, and tourism venues. The vision of Oakland International Airport is to be the airport of choice for San Francisco Bay Area residents and visitors alike. OAK is operated by the Port of Oakland, which also oversees the Oakland seaport and 20 miles of East Bay waterfront. Together with its business partners, the Port supports more than 84,000 jobs in the region with more than a $130 billion economic impact.

Updates about travel during the COVID19 pandemic, current departure and arrival information, airport maps, and details about on-airport parking, shopping, and dining and more, can be found at  www.oaklandairport.com. Follow us on Facebook, Twitter, and Instagram.