Huge, white, container cranes line the shore of the Oakland Seaport creating an iconic scene of industrial beauty and a glimpse into the future. Four of these cranes are taller, each having been raised 27 feet in a year-long project completed in 2018. With their booms at rest and pointed skyward, these taller, mechanical beasts soar 393 feet into the air - about as high as a 39-story building. 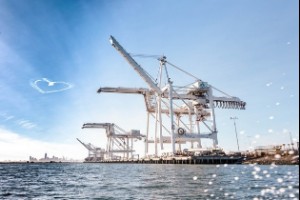 Raising cranes is part of the Port of Oakland’s infrastructure investment strategy to increase its competitive edge on the US West Coast. The crane-raising project cost approximately $14 million.

Oakland is one of the few ports in North America already working the biggest containerships that sail to this continent.

Why is it important to raise the cranes?
It’s critical to heighten cranes so they can serve large vessels with containers stacked high above the decks. Raising four gantry cranes at OICT increased their lifting height from 115 feet to 142 feet above the dock. The cranes’ working booms can now reach over an additional three levels of stacked containers on a big ship’s deck. The taller cranes move cargo more efficiently through the Oakland Seaport and will support OICT’s operations for years to come. 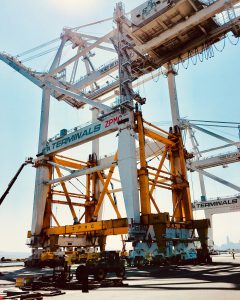 How is a crane raised?

The Port, in partnership with its terminal operators, anticipates heightening more cranes and adding new, bigger container cranes over the next few years.