$400 million in Taxes Are Collected from California Port Users Each Year For Improvements, But Money Remains Unspent

Oakland, Calif.–September 30, 2011–Public officials and maritime industry leaders joined together today at the Port of Oakland to call on Congress to release funds collected from California’s port customers to improve maritime infrastructure, create jobs and preserve California’s role as an international trade leader.

“California’s future as a global leader depends on much needed job creation and economic growth. Utilizing the federal Harbor Maintenance Trust Fund surplus doesn’t cost anyone a dime in new taxes, and it would immediately boost our trade competitiveness, invest in California’s infrastructure and help to grow jobs on our waterfront, our farms and our manufacturing floors,” said Lt. Gov. Gavin Newsom, speaking against the backdrop of container cranes in the Port of Oakland’s Inner Harbor.

Every year, California’s port customers pay more than $400 million in fees into a federal fund with assurances that the money will be available to fund the navigational maintenance and improvements necessary to keep U.S. ports competitive in a global marketplace. Unfortunately, the revenues deposited in the Harbor Maintenance Trust Fund are not being spent and, instead of investing these funds to keep our ports competitive, the trust fund has now built up a surplus of over $5 billion.

“The Californians calling on the federal government to release harbor maintenance funds aren’t just on the waterfront - in fact, agricultural exporters in the Central Valley are hurt when this money isn’t spent as promised,” said Sen. Fuller. “These funds were collected for the purpose of making the necessary infrastructure improvements and by seeing that the funds are spent on those improvements, we can ensure that California’s ports are among the most competitive in the world. Having competitive ports will help ensure that every part of California, once again, has a thriving economy.”

California’s three largest ports contribute an estimated $40 billion per year to national economic output and are responsible for an estimated 1.6 million jobs across the country. To move goods, these ports depend on properly dredged channels, without which California’s international trade, including agricultural and manufactured exports, cannot be shipped in the most reliable, timely and efficient manner–resulting in increased costs for waterborne transportation users and consumers, increased air emissions and fewer jobs.

Fees paid by customers of California’s public ports generate approximately 30% of the Harbor Maintenance Tax revenues which are collected from shippers at approximately 200 ports and harbors across the United States. However, from fiscal years 2005 to 2008, California received only about 4% of the total revenue collected. The ports of Los Angeles and Long Beach, two of the nation’s largest container ports, currently receive less than a penny in benefits per dollar generated.

“California is facing the toughest job crisis since the Great Depression, so we need to make sure that federal investment in our trade infrastructure is a top priority,” said Sen. DeSaulnier. “This important resolution calls on Congress to release funds to our California ports in order to maintain their leadership role in international trade and to create crucial job opportunities around our nation when we need them the most.” 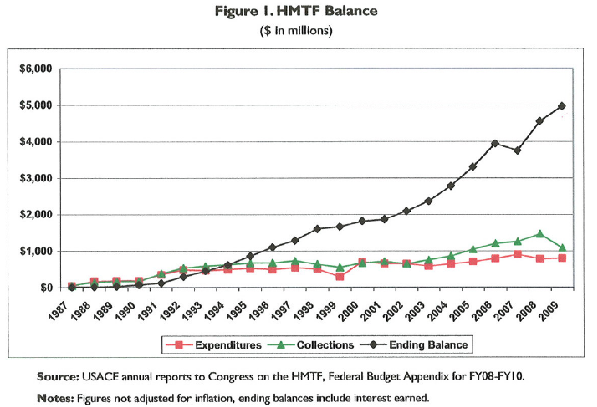 Graphic can be provided electronically upon request.

SJR 15 can be accessed at: http://www.leginfo.ca.gov/bilinfo.html Search Term: “SJR 15”