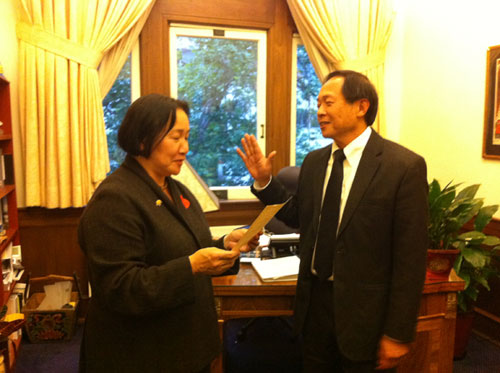 Oakland, Calif.–May 20, 2011 – The Port of Oakland welcomes its newest Port Commissioner, Alan S. Yee, who was recently nominated by Oakland Mayor Jean Quan May 5, and unanimously confirmed by the Oakland City Council, Tuesday, May 17. Mayor Quan said, “Commissioner Yee is a long-time civic leader with significant experience in business litigation including international trade issues. As an attorney for over three decades in Oakland, he has gained unique skills and insights that will directly benefit the Port and City. His track record of accessibility, fairness, and open-mindedness will serve him well in this critical role.” Commissioner Yee will serve through July 10, 2014 filling the seat previously held by Commissioner Kenneth Katzoff.

“I and my fellow Commissioners would like to thank Alan in advance for the energy, time, leadership, and ideas he will bring to the Commission and Port”, said Port Board President James Head. “I also want to thank my colleague, Commissioner Kenneth Katzoff, for his leadership, time, expertise, and commitment over the past several years that have resulted in real benefits for our Port and the local community.”

Commissioner Alan S. Yee has more than 30 years of legal experience as a partner in Siegel & Yee. Commissioner Yee has litigated commercial cases involving trade and international commerce, representing businesses in trade with companies in China, Hong Kong and Taiwan. He received his B.A. in 1974 from Princeton University and his J.D. in 1978 from the University of California's Boalt Hall School of Law in Berkeley.

Commissioner Yee also has an extensive history of community involvement and public service. Yee was elected as a trustee of the Peralta Community Colleges and served as its president in 1994. He was appointed to the City of Oakland's Police Review Commission and served as its chair 1997-2000. Yee has also served on the boards of the Chinatown/Central District Community Development Council for the City of Oakland, the Oakland Intergovernmental Council and the East Bay Conversion and Reinvestment Commission.

“I especially thank Oakland Mayor Jean Quan and the entire City Council for giving me this opportunity to share my experiences and my talents to help the Port of Oakland on its innovative and sustainable path to economic recovery,” said Port Commissioner Yee. “I look forward to working with my fellow commissioners to keep the Port of Oakland on the move, growing jobs and serving as a vital economic engine for our region.”

About the Oakland Board of Port Commissioners: The Port of Oakland is governed by a seven-member Board of Port Commissioners. The Board oversees fiscal, environmental and safety policies which cover the approximately 16,000 acres of Port property that stretches from the Emeryville border in the north to the San Leandro border in the south. Port Commissioners are residents of the City of Oakland and serve four-year terms without compensation. Their responsibilities are vast and require a great deal of their time, all donated to the success of the Port and the region.