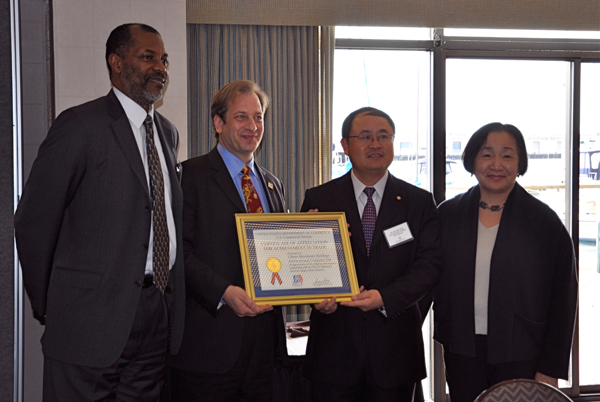 Oakland, CA – March 7, 2011– The Port of Oakland and China Merchants Holdings International (CMHI) jointly hosted “Blueprint for China’s Shipping and Logistics Growth,” at the Waterfront Hotel in Oakland’s Jack London Square this past Friday, March 4. This half-day symposium brought together U.S. Department of Commerce, Oakland Mayor Jean Quan, as well as the local business community and trade organizations. to raise awareness for U.S.-China trade issues and provide an opportunity for CMHI and other business partners to increase export-import trade through the Port, which has the potential to create jobs throughout the Northern California MegaRegion.

“This partnership between the Port of Oakland and China Merchants means more containers, and more containers mean more job opportunities, which in turn will strengthen the regional economy,” said James Head, President of the Oakland Board of Port Commissioners, “According to our recently updated economic impact report, the Port is directly tied to more than 50,000 jobs in the region, with 9,800 as a result of the activity at the Oakland seaport alone.”

In November 2010, the Port of Oakland and CMHI entered into a Memorandum of Understanding to strategically market and develop a supply chain linkage to connect the Port with California’s Central Valley and exporters on both sides of the Pacific with a specific focus on agricultural commodities and perishable products. Specifically, this partnership between the Port and CMHI: 1) increases the Port’s “cold supply chain” offerings and services to U.S. shippers seeking to export their perishable products; 2) creates a robust supply chain from California’s Central Valley all the way to inland points in China, and 3) uses the trade and logistics facilities to be built at the Port of Oakland, which will mirror the CMHI facilities already in operation at the port of Shenzhen. The Port and CMHI have also been working collaboratively to conduct joint marketing activities, market research, and exchange of best practices.

Friday’s event focused on expanding trade volume to fulfill the Port’s number one goal of growing its maritime business, while also supporting the objective of President Obama’s National Export Initiative of doubling export volumes by 2015. The symposium detailed China’s demographic, manufacturing and sourcing trends; outlined the role of public and private enterprise necessary for transportation infrastructure and logistics facilities to meet future demand; and explored views on transportation and logistics challenges when importing from and exporting to China.

About the Port of Oakland: The Port of Oakland oversees the Oakland seaport, Oakland International Airport and 20 miles of waterfront. The Oakland seaport is the fifth busiest container port in the U.S.; Oakland International Airport offers 130 daily flights; and the Port’s real estate includes commercial developments such as Jack London Square and hundreds of acres of public parks and conservation areas. The Port of Oakland was established in 1927 and is an independent department of the City of Oakland. Please visit: www.portofoakland.com.