P O Shipping inaugurated the Oakland call Monday, December 20, 2010, with the arrival of its vessel, the POS Hong Kong. It is part of a weekly Central Asia Express (CAE) service, which was launched in August 2010 with one U.S. port of call at Long Beach. This service will now link Oakland with Hong Kong, Yantian, Xiamen, Ningbo, and Shanghai.

“Our expansion to serve Oakland demonstrates our commitment to provide a greater level of service to our customers,” said K.K. Chan, president of P O Shipping Agency (USA), Inc. “As the third-busiest port on the U.S. West Coast, and its location as a premier gateway for U.S. agricultural exports, Oakland is a natural choice.”

Five vessels in the 2,700 to 3,200 TEU (twenty-foot equivalent container unit) range comprise the weekly service and will call each Saturday at the Oakland International Container Terminal facility (berths 57-59).

P O Shipping also operates an integrated feeder network in China, which will enable cargo from the outlying ports of Qingdao, Tianjin, Dalian, and Nansha to transship to the CAE for direct transit to Oakland.

“P O Shipping’s decision to expand to Oakland means more choices and flexibility for U.S. importers and exporters who use our gateway,” said James Kwon, the Port of Oakland’s maritime director.” Its service connects Oakland with some of the fastest-growing regions in China, particularly the Yangtze River Delta and the northern Bohai Rim.”

About the Port of Oakland
The Port of Oakland oversees the Oakland seaport, Oakland International Airport and 20 miles of waterfront. The Oakland seaport is the fifth busiest container port in the U.S.; Oakland International Airport is the second largest San Francisco Bay Area airport, offering over 130 daily flights; and the Port’s real estate includes commercial developments such as Jack London Square and hundreds of acres of public parks and conservation areas. The Port of Oakland was established in 1927 and is an independent department of the City of Oakland. Please visit: www.portofoakland.com. 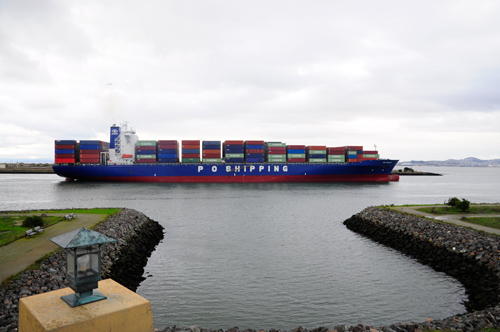 The POS Hongkong departs the Oakland International Container Terminal at the
Port of Oakland Dec. 20, completing its first call to Oakland, and inaugurating
the start of the CAE (Central Asia Express) vessel service linking China and Oakland.