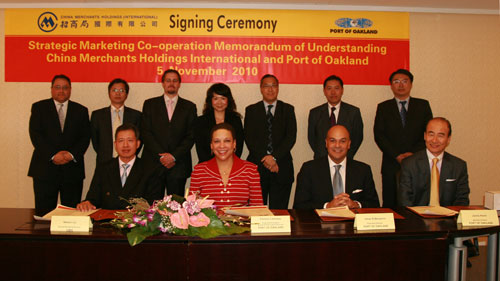 The Port of Oakland is the 3rd-busiest container port on the U.S. West Coast and the 5th-busiest in the United States. It serves as a premier gateway for U.S. food products such as fruit, nuts, vegetables, meats and wines exported throughout the world. The port is aggressively coordinating its activities with the National Export Initiative. The purpose is to expand the Port of Oakland's export cargo volume to help meet the U.S. government goal of doubling export volumes by 2015.

“The form and scale of this partnership is a first for the U.S. port industry,” said Omar Benjamin, Port of Oakland Executive Director. “China is a significant and rapidly growing market for U.S. food and agriculture products, but the lack of cold chain services is inhibiting the export potential. Our initiatives will help make it easier, safer and faster to export U.S. commodities from California and distribute them throughout China.”

The first activity of the Port of Oakland and China Merchants strategic partnership was the Cold Chain and Logistics Seminar on November 11, 2010 in Chengdu, in central China. It focused on the demand for U.S. products in the emerging markets of western China. Leading ocean carriers and logistics providers discussed distribution challenges in China's inland regions and provided best practices case studies. The seminar was co-sponsored by the Port of Oakland, the U.S. Foreign Agriculture Service, and the California Agriculture Export Council.

About the Port of Oakland
The Port of Oakland oversees the Oakland seaport, Oakland International Airport and 20 miles of waterfront. The Oakland seaport is the fifth busiest container port in the U.S.; Oakland International Airport is the second largest San Francisco Bay Area airport, offering over 130 daily flights; and the Port’s real estate includes commercial developments such as Jack London Square and hundreds of acres of public parks and conservation areas. The Port of Oakland was established in 1927 and is an independent department of the City of Oakland. Please visit: www.portofoakland.com.