First half of 2010 delivers an overall 13% increase in container traffic; One of the largest containerships to visit Oakland started new service today 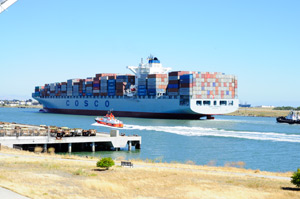 Oakland, CA -- July 29, 2010 – Port of Oakland January to June statistics for 2010 show approximately a 13% increase in its overall cargo business compared to the first six months of 2009. Looking at June 2010 figures, there was a more than 30% jump in import activity compared to June of the prior year. Although these numbers are impressive, the Port is working it’s way back from one of the worst years in the maritime industry - the global maritime industry reportedly lost approximately $20 billion in 2009.

Port of Oakland Executive Director Omar Benjamin said, “Exports began to rebound last year and now we’re seeing some recovery on the import side of our business. We’re pleased to see that cargo activity is on the rise. We hope to see it sustained because that would mean a better future for our maritime tenants and customers and our community.” Benjamin added, “When you think of a container, consider all the jobs along the supply chain: from longshore workers at the docks, to truckers, to warehouse managers, and retail employees. If the US economy strengthens then goods movement through our port can deliver job and economic benefits for Oakland and the region.”

James Kwon, Port of Oakland’s maritime director explained, “In addition to acquiring larger vessels, carriers are adding more services at Oakland. Today is the inaugural visit of one of the largest vessels to come to our port, the COSCO Indonesia.” The ship is docked at Oakland International Container Terminal operated by Stevedoring Services of America (SSA).

COSCO Indonesia can carry as many as 8,500 TEUs (*Twenty-foot Equivalent Unit). This is about twice the size of the average ship that calls Oakland. If you were to put all the containers that can fit on the vessel end-to-end, they would stretch across a distance of more than 30 miles. COSCO Indonesia is a brand new ship on it’s first call to the Port of Oakland. Kwon remarked, “We have the capacity to accommodate large ships like COSCO Indonesia. We have a deep harbor (50 Feet), super post-Panamax cranes, and two Class 1 railroads serving our port. Our state-of-the-art cranes can handle these bigger, wider ships and the rail service efficiently moves cargo to and from points in the US interior through Oakland.”

COSCO Indonesia serves the COSCO North China/U. S. Southwest Coast Express Service. After Oakland, this vessel will be making its way to the Port of Prince Rupert in British Columbia, Canada, and then will return to ports in Japan and China.

*TEU container sizes are measured by an international standard called a TEU or Twenty-foot Equivalent Unit. Containers vary in size, but the most common container size is 40 feet in length, or 2 TEUs.

About the Port of Oakland
The Port of Oakland oversees the Oakland seaport, Oakland International Airport and 20 miles of waterfront. The Oakland seaport is the fifth busiest container port in the U.S.; Oakland International Airport is the second largest San Francisco Bay Area airport, offering over 140 daily flights; and the Port’s real estate includes commercial developments such as Jack London Square and hundreds of acres of public parks and conservation areas. The Port of Oakland was established in 1927 and is an independent department of the City of Oakland. Please visit: www.portofoakland.com.