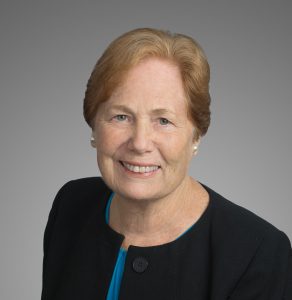 Former Board President Joan Story joined the Oakland Board of Port Commissioners in 2015. She served as President from July 2017 to July 2018.  Commissioner Story is counsel to the international law firm of Sheppard Mullin Richter & Hampton, LLP.

Ms. Story has more than 35 years of experience representing developers, foreign and institutional investors and corporate users of commercial real estate.  Ms. Story is a graduate of Occidental College and received an MA in Political Science from UCLA and a JD degree from UC Davis School of Law.  She and her husband, Robert Kidd, have been Oakland residents since 1977 and have two children who are also Oakland residents.

Ms. Story has served on many boards, including The Trust for Public Land California Advisory Board, the Child Care Law Center and the Alumni Boards of Occidental College and UC Davis School of Law. She is a Fellow of the American College of Real Estate Lawyers. Ms. Story has been recognized by the San Francisco Business Times as a "Northern California Real Estate Woman of Influence" and by San Francisco Magazine as one of "Northern California's Top 50 Women Lawyers."